• Top Choice Surveillance will fence off a section of the water tower from Sierra Leone through Chebitet to Masaita area, a distance of 30 kilometres at an estimated cost of Sh80 million.

• Kenya Water Towers acting director-general Julius Tanui handed over the fencing site to the contractor at Maasai Mau on January 8. 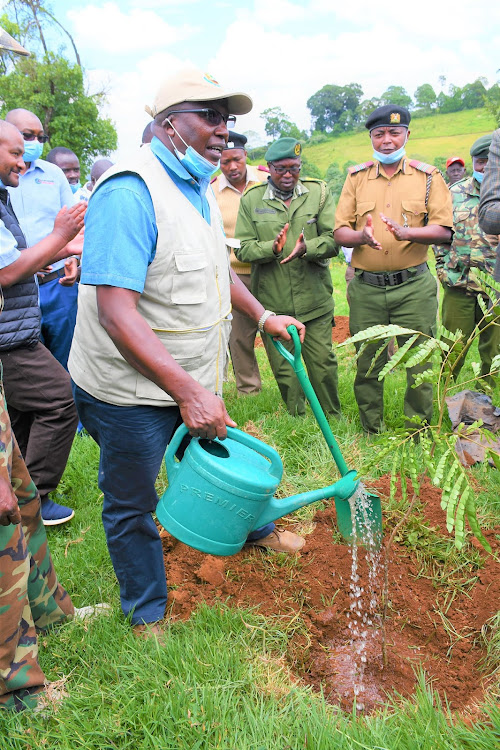 Kenya Water Towers Agency acting director-general Julius Tanui plants a commemorative tree during the handing over of the fencing site officially to the contractor at Maasai Mau.
Image: COURTESY

The fencing of Maasai Mau water tower has started to take shape after the site was handed over to the contractor.

Top Choice Surveillance will fence off a section of the water tower from Sierra Leone through Chebitet to Masaita area, a distance of 30km at an estimated cost of Sh80 million.

Kenya Water Towers acting director-general Julius Tanui handed over the fencing site to the contractor at Maasai Mau on January 8.

Tanui was accompanied by the Narok South deputy county commissioner Felix Kisalu and senior government officers. The team planted tree seedlings at the border in Sierra Leone where the fence will start.

An environmental and social impact assessment by Norken International shows that the construction phase is expected to take at least 12 months. Solar-powered and main energisers will be used in the fence.

The water towers agency has planned to put up an electric fence around the entire catchment area, a distance of 119 kilometres.

The intermediate fence is aimed at preventing future encroachments into the water tower, mitigate human-wildlife conflict and reduce illegal extraction of natural resources.

The fence comes a year after the government launched an initiative to plant 10 million trees.  About four million tree seedlings have been planted.

The agency is calling upon stakeholders to adopt a block of 100 hectares for 100,000 seedlings or a kilometre of fence estimated at Sh2.5 million. 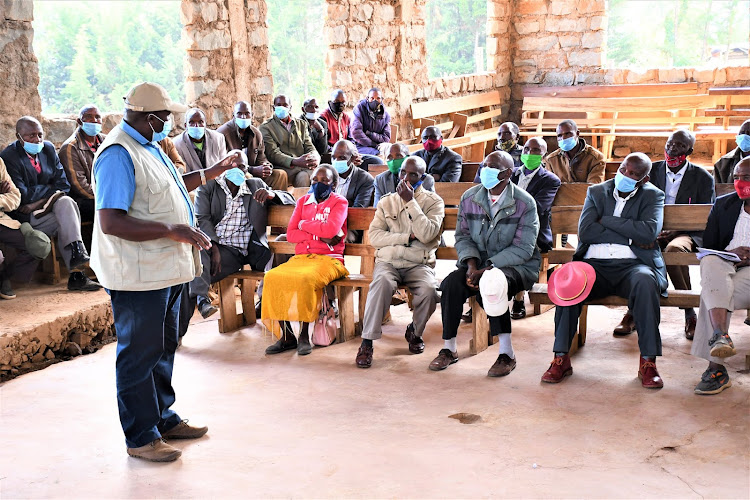 Kenya Water Towers Agency acting director general Julius Tanui engages the community during the handing over of the fencing site officially to the contractor at Maasai Mau.
Image: COURTESY

A survey in 2008 of 7,971 households showed that more than 30 per cent had no documents to support their occupation.

In 2018, under Phase I reclamation exercise, 11,119 acres of forest land in Maasai Mau was recovered.

The first phase of the evictions covered 1,772 households totalling 8,860 people They took place from July 6 to 10 between the Nkoben river north boundary and Kosia. About 3,000 head of livestock were removed but crops were spared.

This brings the total area under rehabilitation to slightly over 50,000 acres. In 2019, seeds of 13 species that had been selected for aerial seeding were planted in the tower. These included cape chestnut, moringa, mukinduri and forest dombeya. Others are African redwood, pencil cedar, mama mutere, Nile tulip, black ironwood, podo, parasol tree, Meru oak and African satinwood.

Some 1,981kg from the 13 tree species was broadcasted in Maasai Mau. This is estimated to have included approximately 60 million individual seeds, which will yield an estimated 30 million seedlings at a conservative germination rate of 50 per cent.

The effective stocking rate, discounting for damages, losses and predation by birds and rodents, is calculated to be approximately 7,500 seedlings per hectare. The high-starting stocking density takes care of various conditions.

Maasai Mau was the most encroached water tower of the 22 blocks of the Mau Forest Complex Water Tower. The forest covers 114,355.2519 acres.

Some of the areas in the water tower were completely degraded and could not be restored by natural regeneration, hence, the need for fencing.

The fence will have five to 10 wires between heavy timber poles to restrain big game, antelope and carnivores.

The Kenya Water Towers Agency has reported on the impact of the project on air quality, noise and vibration, solid waste, surface water, waste and effluents.

There will be minimal clearance of trees and felling big trees will be avoided as much as possible. The trees on the 'red list' of threatened species will not be touched.

“Use of heavy mechanisation that would severely clear vegetation will be avoided".

Search and rescue will be undertaken each morning for small mammals, reptiles and invertebrates that may have been displaced by the construction.

The restoration of the Mau forest will cost about Sh900 million. It began as soon as illegal settlers were evicted.

Some Sh16,396,000 had been budgeted for the eviction of the illegal settlers, who have destroyed huge sections of the forest.

A report by the agency said the remaining 37,065 acres will be rehabilitated through natural regeneration and enrichment planting.

The area had sufficient vegetation to support the production of seedlings from the existing trees, seedlings, saplings and shrubs.

For this to succeed, all potential seedling sources, their quality and quantity, was mapped and profiled. For the 4,942 acres, the seedling requirement will be 1,250,000. This will include bamboo to rehabilitate riparian ecosystems and critical catchment areas.

After settlers were evicted, surveys were undertaken to establish beacons necessary for fencing of the tower.

Authorities said the forest is a critically important biodiversity conservation area — home to over diverse flora and fauna species including 393 plants, 132 birds, 49 mammals, 10 reptiles and amphibians and 368 spiders, among others.

It has indigenous tree species threatened by illegal logging and charcoal burning.

"The overall goal of the proposed electric fence project is to enhance management, conservation and protection of Maasai Mau Forest (Water Tower) to ensure that it continues to meet the ecological, social, economic and cultural needs of the current and without compromising the ability of the future generations to meet their own needs," Kenya Water Tower Agency says.

It said a fence reduces human-wildlife conflicts since it controls large animals.

The fence also keeps away people, cattle, sheep and goats that can destroy planted tree seedlings.