• Agriculture CS Peter Munya said the Ministry is targeting an additional 1,500 acres under pyrethrum in Nakuru by April 2021.

• Kenya, which was producing about 80 per cent of pyrethrum globally has been overtaken by other East African countries such as Rwanda and Tanzania. 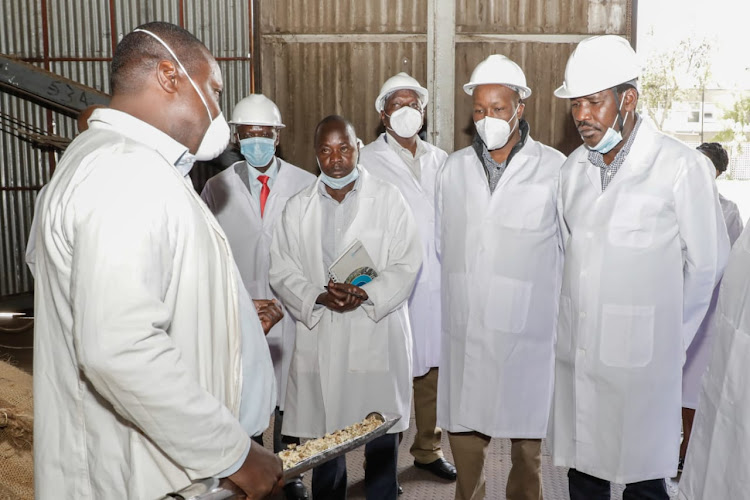 The government has allocated another Sh500 million in this financial year for the revival of the once vibrant Pyrethrum sub-sector.

Agriculture CS Peter Munya said Sh1 billion would be required to fully revive production and processing of the plant that once employed thousands of people directly and indirectly.

Speaking at the Pyrethrum Processing Company of Kenya plain in Nakuru’s Industrial Area, Munya said the newest allocation will be released in bits with the initial tranche of Sh200 million being disbursed in two weeks.

“The revival starts immediately and I will be in Molo in a week’s time to launch the road map into pyrethrum growth and processing,” Munya said.

Also present were that Nakuru County Executive Member for Agriculture, Immaculate Njuthe, and her Nyandarua counterpart, John Karitu among other national and county leaders.

Efforts to revive the sector started in 2003, immediately after former President Mwai Kibaki took over power but this has been a mirage as successive governments try to help farmers replant the crop.

Munya said the Ministry is targeting an additional 1,500 acres under pyrethrum in Nakuru by April 2021.

Nakuru was among the leading pyrethrum grower for decades until the early 1990s, when production started dwindling.

Kenya which was producing about 80 per cent of pyrethrum globally has been overtaken by other East African countries such as Rwanda and Tanzania.

Munya blamed mismanagement and corruption for the fall of pyrethrum production adding that President Uhuru Kenyatta was committed to ensuring that the country reclaims her global position in flower production and the lost market.

“Many consumers still want to buy pyrethrum from Kenya and we have requested from America, Europe, and Russia,” he said.

Munya observed that County Government of Nakuru had also set aside Sh60 million for the sub-sector this financial year and managed to help put 1,000 acres under the crop in the last two years.

He also promised to help repossess PPCK assets which have been grabbed.

Governor Kinyanjui commended the CS for setting up the National Steering Committee on Cotton and Pyrethrum Revival chaired by George Wachira.

The governor said the committee has come up with recommendations to improve the sector and steer it to prosperity.

“Pyrethrum is a critical cash crop in Nakuru and we will not relent in our quest to ensure the full revival of the sector,” he said.

“The aim is to have the Pyrethrum sector become a source of income for farmers and my administration is happy that farmers are becoming more confident in growing the crop due to prompt payment and support,” said Kinyanjui.