• Police in Laikipia county are yet to recover a herd of livestock stolen from Tiamamut village in Laikipia North subcounty and driven towards Samburu county.

• They were stolen from from the homestead of Lobara Mosiany by about 40 heavily armed bandits. 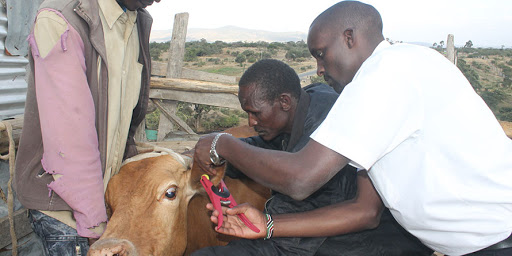 TAGGING: Farmers in Laikipia tag the ears of cattle so they can be identified if they are stolen.
Image: COURTESY

Police in Laikipia county are yet to recover more than 90 head of cattle and donkeys stolen from Tiamamut village in Laikipia North subcounty on Sunday and driven towards Samburu county.

Most were stolen at around 6.30pm from the homestead of Lobara Mosieny by about 40 bandits armed with AK-47s and other assault rifles.

The bandits from a neighbouring county fired in the air to scare off residents while driving off the herd.

Speaking to the media on Monday, 84-year-old Mosieny said the attackers easily overpowered him and his family.

"This group raided my homestead. My sons scampered for safety and the attackers threatened to kill me if I summoned assistance. They left behind one injured cow and a calf," Mosieny said.

"I have been made poor and I am appealing to the security personnel to speedily recover my livestock. The route the bandits used is well known and we have told this to police officers to trace the bandits and take action," he said.

MP Sarah Lekorere visited the region after the raid and deplored substandard security at the border to curb frequent bandit attacks.

For six months since February, 12 people including five National Police Reservists, have been killed by bandits.

"These people are trying to displace us," Lekorere said.

She appealed to Inspector General of Police Hillary Mutyambai to  put in place stringent measures to end rampant cattle rustling by raiders from neighbouring counties.

"As a community, we feel very vulnerable because the government disarmed National Police Reservists based here who used to ward off the bandits but the armed raiders are still terrorising us," Lekorere said.