They were chased from a rented house after they failed to pay rent for eight months..

•  Mother, father and eight children live in a hole for the past four years.

• The eldest girl was defiled and now is the mother of a one-and-a half-year-old child. 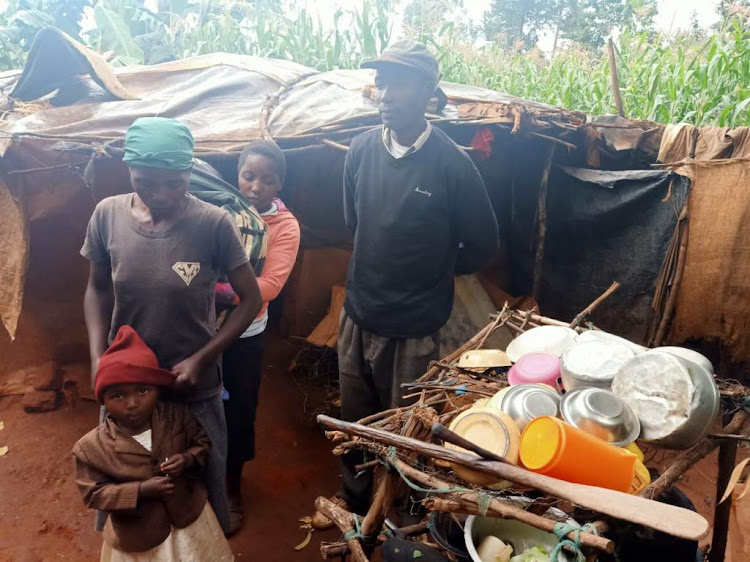 The cries of a tiny girl welcome us to the hole in the ground that's home for Seth Efedha, his wife and eight children.

It's literally a hole in the ground in Kobos Village in Trans Nzoia county.

A jovial mother beckons us. The family used to dig clay for bricks in the pit and now have covered it with sticks and torn plastic sheets.

It's so low that we have to kneel to enter. The house' is about two and a half feet high.

Inside it's dark, stuffy and congested. A torn piece of cloth is the 'door'. In one corner there's a cooking area. A torn curtain separates the bedroom.

“Welcome to our home for the past four years,” says mother Diana Efedha. She and her husband Seth have eight children.

They sought shelter in the hole after they were chased away by their landlord for rent arrears.

"We used to do menial farm jobs and we managed to save and bought this piece of land," she tells the Star.

But they lived elsewhere and were unable to pay rent for eight months.

“We looked everywhere  but landlords rejected us because we had so many children and couldn't pay rent in our last place. We found no shelter," she says.

So they decided to cover the hole, make it a 'home' and start their lives from there.

“At night we push the chair to the door to  block the entrance,” Diana says.

Efedha said their eldest daughter sat the KCPE and was supposed to enrol in secondary school. 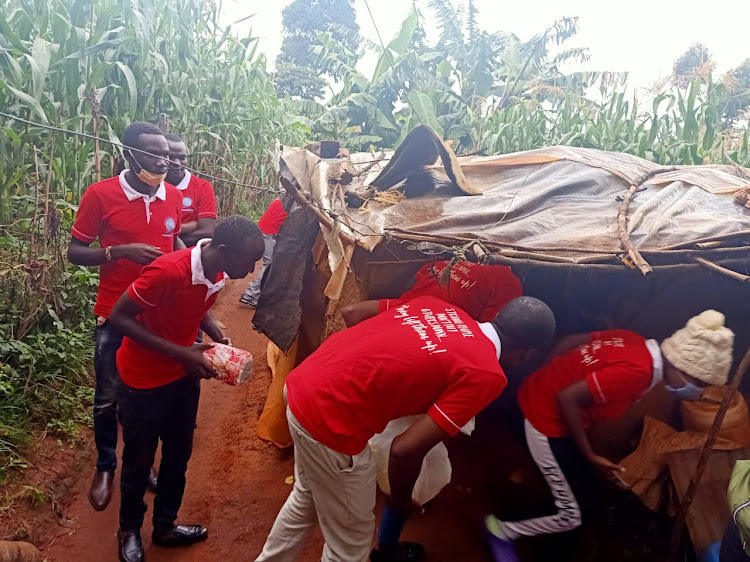 “We decided to sell the bricks and enrol our daughter in high school. We hoped our situation would change and we could build a temporary house."

In the rainy season they are always in and out of the hospital because of coughs and malaria. The 'house' is full of mosquitoes.

“I suspect this young one is not feeling well since he has been moody all afternoon. Tomorrow, I will take her to hospital,” Diana says.

As we talk, her husband Seth Efedha comes in from the fields.

Efedha had gone to weed maize in the nearest farms to feed his family that day.

“I thank God what we get what  is enough for the day but nothing remains for savings to enable me set up  house for my children,” he says.

Seth says they find it hard to sleep during the rainy season as the house leaks and it's muddy and cold.

“When it rains at night we don’t sleep, we are forced to hold the young ones in our arms so they can sleep,” he said.

Sometimes when it rains, he's too tired to look for work and sleeps during the day.

Efedha says though most people pray for rain at night, "I always ask God to let the rains to come during the day so at night I can have time to rest."

The father of eight says that his hope for educating his children to have a bright future was almost destroyed when their eldest daughter was defiled.

“Our daughter became pregnant I almost lost hope since I was struggling for her to have a brighter future,” he said.

“She gave birth and we are taking care of our grandchild as she continues with her education. She's now in Form 2."

The girl was lured by a man who used to offer her food.

“Sometimes I used to go to school on an empty stomach and this man used to offer me food but I never knew his motive. Eventually I realised I was pregnant," she says.

She thanks her parents for enrolling back in school and taking care of her child.

Youths in Global Vision Kwanza constituency now are sourcing for funds to help build a real house for the family.

Led by their chair Hosea Chemchem, the young people said that they came to know about the family when one of their members met them while conducting the census.

Census enumerator Benson Mwangi said he decided to share their experience with the group and they decided to help them set up a house. But they have a long way to go.

Mwangi urged well-wishers to urgently help the family since the region is experiencing heavy rains.

Chemchem said they have raised Sh40,000 so far.

“We as youth don’t have a stable income and we depend on what we borrow from our parents. We still need more money to build a house.

“We have been contributing something small to buy food for this family every month,” he said.

"I understand many Kenyans have lost pay due to Covid-19," Mwangi said, "but I urge those who can manage to save a coin to help this family."

Overall shortage of housing in Africa is estimated now to be 56 million housing units.
Business
11 months ago