Demand their land be returned or there will be no rally

• The BBI in Narok that had earlier been scheduled in Suswa changed the venue for fear it would be disrupted.

•The community is claiming those who leased the ranch are now demolishing their houses. 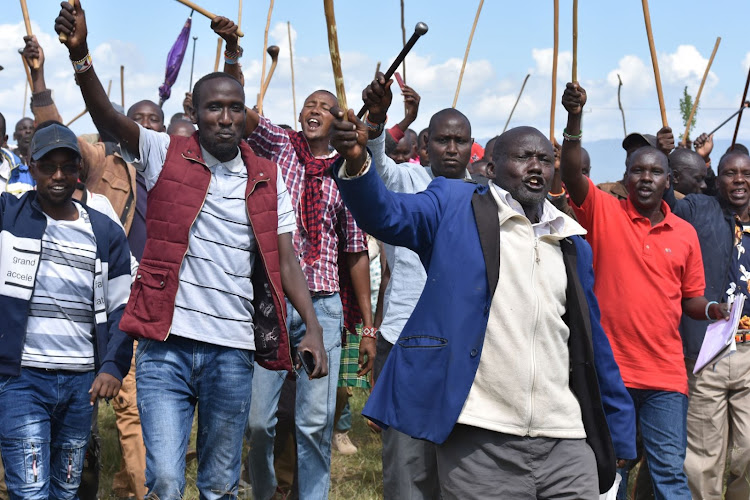 Kedong community members on Tuesday said they will mobilise all Maa counties to stop the Building Bridges Initiative meeting in Narok this weekend.

The BBI in Narok had earlier been scheduled for Suswa but the venue was changed for fear it would have been disrupted by the Kitet community that has been struggling for 50 years to reclaim their land.

This land is ours and any attempts by the government to arm-twist us will make us oppose that BBI with alL the energy at our disposal.

The Kitet Maasai community has laid claim to the 75,000-acre Kedong ranch in Suswa. They say they'd rather die than lose their ancestral land.

A section of leaders spoke after holding demonstrations inside their farm in Suswa on the way to Narok. Armed policemen were moving around in cars without number plates.

“We are saying this land is ours and any attempts by the government to arm-twist us will make us oppose that BBI with all the energy at our disposal,” chairman Raphael Kerenke said.

Records in the Lands Registry in Nairobi show Kedong Ranch is owned by 23 shareholders along with the government of Kenya that has built a dry port on 1,000 acres.

Ugandan, Rwandan and South Sudan governments have all been issued 1,000 acres each to build dry ports.

The three foreign countries are yet to construct their ports. The community also claimed another investment firm has been allocated 2,000 acres to put up a brewery.

The Kedong Ranch Company that leased the farm in 1972 before changing the name from Muguga Land Company is said to have entered a deal with four members from the community to withdraw a court case.

The community told the new investors on the ranch they will not be responsible for any losses they incur once the land reverts to the Kitet Maasai.

The Kedong Ranch Company that leased the farm in 1972 before changing the name from Muguga Land Company is said to have entered a deal with four members from the community to withdraw a court case.

Robinson Torome claimed four men who are known to them entered into the deal with the leasing company in July last year and were given 4,700 acres and Sh10 million cash

The community now claim new members could be added to the list of shareholders, and that all avenues have been blocked for them; they cannot get that information.

There is a heavy presence of armed police officers on the ranch and they are said to be protecting workers digging trenches around the entire farm.

The Kitet Maasai community says the trenches have killed several of their livestock that fell into them. They are more than five feet deep and four feet wide.

Elder Simon Nkai said the graves of his ancestors dot the land that is now in dispute. He said that only bullets fired at him and his family will force them to leave the property.

Mark Tinkoi blamed the government for not standing with the local community that lived with the white settlers on the same land in the 1880s.

“The Kedong Ranch Company recently demolished our permanent houses that were built with millions of shillings and compensated us with only Sh46, 600," Tinkoi claimed.