•Kibor Talai's estate includes a 1,500-acre property next to Moi University and commercial and agricultural parcels in Uasin Gishu and Elgeyo Marakwet 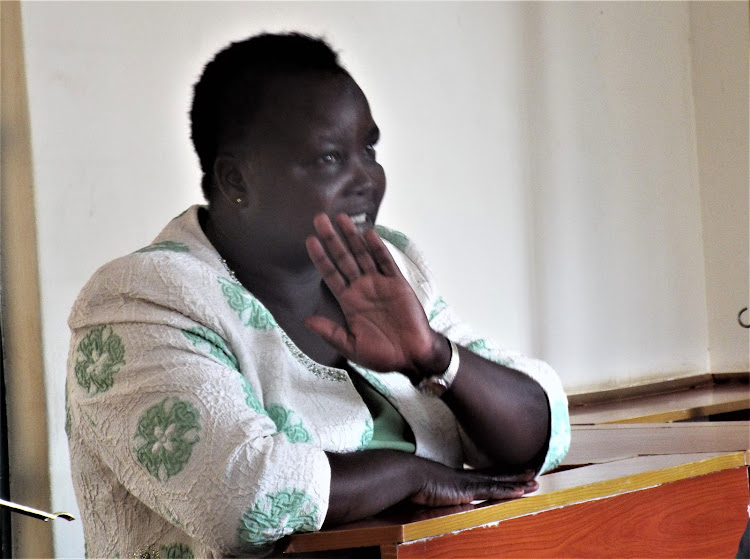 IRENE TALAI Irene Talai who is one of the widows fighting over control of the vast estate of Kibor Talai. She testified in court on July 5th
Image: MATHEWS NDANYI

Two widows of former colonial-era chief and opposition activist Kibor Talai are fighting over the control of his more than Sh3 billion estate in North Rift.

The first wife, 84-year-old Tapyotin Talai, and her five children say in a suit at the High Court in Eldoret that co-wife Irene Talai, who has three children, did not contribute anything to the acquisition of the estate and should not claim the control of the assets.

Talai died seven years ago aged 95. He was the chairman of Ford Kenya in Uasin Gishu County.

His estate includes a 1,500-acre property next to Moi University and commercial and agricultural parcels in Uasin Gishu and Elgeyo Marakwet.

"I have been completely locked out of the income yet as the first wife I should be the main beneficiary,” she said.

She maintains that it was wrong for Irene to demand an equal share of the estate yet she came into the marriage after the property had been acquired.

Tapyotin dismisses as fake a will written by Talai before he died. Irene has tabled the will which she says gives her the control of the estate.

Irene says the will was authored by their husband before he died. “The deceased gave me the prime land near Moi University on which stand several commercial business premises before he died. There is no way I will share it equally with the first wife,” she told Justice Githinji.

She denies that the commercial properties near Moi University attract Sh18 million rent annually, insisting that the actual rent is Sh300,000.

She argues that she is rightly entitled to the share of the Talai estate, adding that the deceased gave her 500 acres out of the 1,500 acres near Moi University.

Githinji set the hearing dates for the succession case as November  25 and 26.

Nandi elders have asked Lands Cabinet Secretary Faridah Karoney to pull down a fence erected on the disputed land she claims to have bought at ...
News
3 years ago
by MATHEWS NDANYI
Rift Valley
08 July 2019 - 00:00