They say at the rate of butchery, donkey population will be diminished

• There are four licensed donkey butcheries in the country. 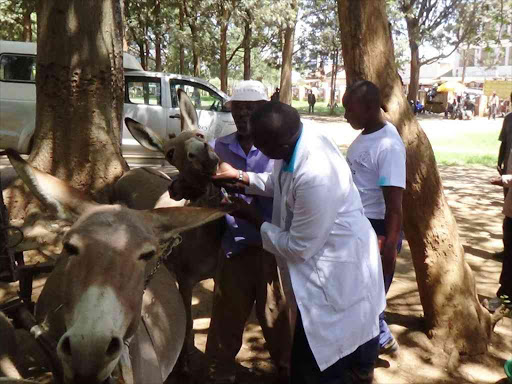 A donkey is being treated at Central park in Nanyuki town.

Donkey protection groups want the government to ban all donkey abattoirs in the country.

Led by Brooke East Africa Kenya finance and operations manager Doris Njiru, the groups said the slaughterhouse businesses have had a negative impact on donkeys’ population.

Speaking in Njoro on Friday during National Donkey Celebration Day, Njiru said Kenya is the only country in East Africa that has allowed the slaughtering of donkeys.

“Brooke East Africa Kenya shall push to ensure a ban on the same,” she said.

Under the theme My donkey My Life, similar sentiments were echoed by Brooke programmes manager Elijah Mitheki, who said donkeys have had a positive impact in transforming lives of women and youths at grassroots.

He said the transformation can only go on if the government moves in to stop the businesses of donkey slaughter.

“These donkeys have been of great importance to our women and youths at the grassroots level. Therefore, our appeal to the government is to listen to the cry of donkey farmers and put a ban on the donkey slaughter,” he said.

Similar sentiments were made by Humphrey Wafula from Farming Systems Kenya, one of the partners organising the event.

He decried the continued decrease in the donkey population in the country due to what he termed as donkey smuggling and theft cases, following the emergence of donkey slaughter.

With statistics revealing that 3,000 donkeys are slaughtered in the country every year, Wafula says if the government does not step in, farmers will be affected in the future.

“We need to ask ourselves whether the donkey slaughterhouse businesses are really sustainable,” Wafula said.

Farmers expressed worry over donkey theft in Njoro and Naivasha.

They are, however, optimistic that the government will hear their pleas.

“We just hope the government will listen to our cry,” Wafula said.

Assistant county commissioner Lydia Mwatata admitted that there have been rampant cases of donkey theft.

She called on farmers to also report such cases so the law can take its course.

The administrator said security agencies will continue to play their role in ensuring the safety of the animals.

During the event, Mr and Miss Donkey 2019 were crowned.