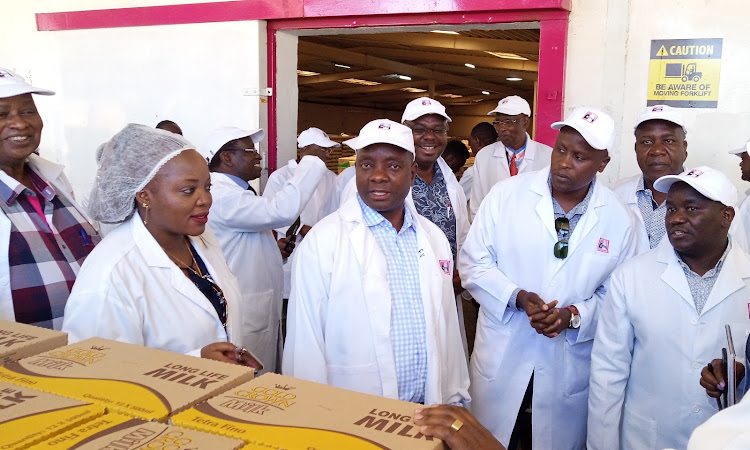 NEW KCC A delegation of MPs led by Kanini Kega (2nd) from right) during a visit at the New KCC factory in Eldoret on March 22nd
Image: MATHEWS NDANYI

New KCC is losing more than Sh15 million monthly due to new trade barriers and taxes introduced by Tanzania on milk exported to the neighbouring country.

The firm's managing director Nixon Sigei told the Parliamentary Committee on Trade and Industry that Tanzania was its largest export market and that the company was now facing major challenges operating in the neighbouring nation.

"They have increased what they call veterinary taxes by more than Sh100 and goods cleared by KEBS are being forced to undergo fresh clearance in Tanzania yet all this should be harmonized through the EAC," he said.

Sigei said the company was however still working hard to retain the Tanzanian market with hopes that the trade barriers would be eliminated.

He spoke when the committee chaired by Kieni MP Kanini Kega visited the New KCC factory in Eldoret to asses how Sh1 billion government funding had been used to modernize the firm's operations.

Kega said such barriers should be non-existent seeing as both states are members of the East African Community.

“We are all brothers and sisters and we hope the barriers will be sorted out at the highest level through intervention by our president”, said Kega.

Over the last 12 months, lack of commitment on the part of the six EAC member states has seen intra-regional regional trade decline significantly, raising questions about the integration agenda.

He said an influx in imported milk from Uganda which sells at a cheaper rate had also eaten into the firm's markets in parts of Western Kenya.

The cost of producing milk is lower in Uganda hence prices of milk are lower. Farmers locally should also find ways of cutting the cost of production in order to compete with milk producers from other countries," Sigei said.

Post a comment
WATCH: The latest videos from the Star
by MATHEWS NDANYI
Rift Valley
25 March 2019 - 00:00
Read The E-Paper