CEO Chebor says if farmers fail to repay the money, the sacco will go to their homesteads and auction valuables 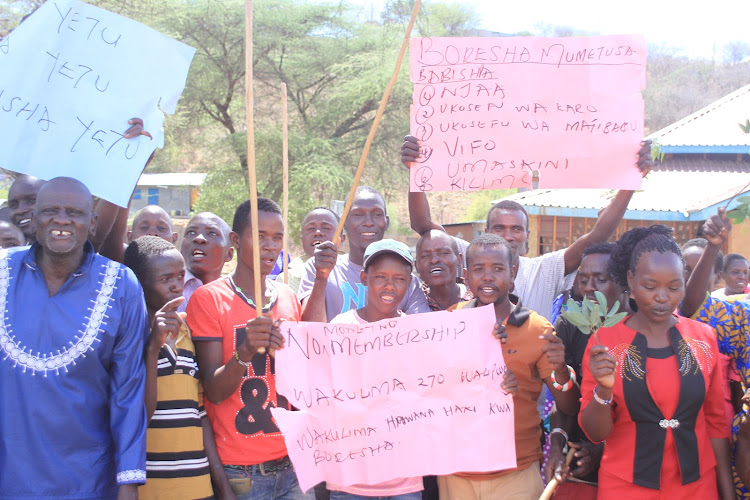 The more than 200 farmers from Eldume Irrigation Scheme said they are yet to receive a single cent since the Kenya Seed Company - Kitale branch released their annual payout in January.

The group chanted ‘Haki yetu’, ‘Serikali saidia’, ‘No money no Boresha sacco’ as they marched around Marigat town.

Boresha Sacco CEO Moses Chebor on Saturday said the institution will not stop until all defaulted loans are recovered. He spoke during the society’s AGM.

“This is just the beginning. If farmers fail to give us substantive formula on how they will repay our money, then we are ready to go further into their homesteads and auction all their valuable individual properties,” Chebor said.

Farmer Judy Lesimante said, “I was expecting Sh130,000 from sale of maize after deduction of all expenses. I harvested the maize on my two acres in Lororo.”

She said her child in secondary school has been at home for more than two weeks for lack of fees.  Lesimante said she has no other source of income.

Lesimante said she is yet to receive any pay since she sold her maize in September last year. She urged the government to intervene and push the sacco to release their money.

Lesimante said the farmers' 53 children failed to join Form 1 for lack of school fees. Only 10 got money from others.

“I no longer afford basic needs for my family, including food, school fees and money to pay for farm cultivation,” he said.

The farmers denied taking out loans through a local Eldume cooperative society. They said they borrowed individual loans from Boresha Sacco and expected the money to be deducted from their proceeds.

“Everything is at a standstill. Our hands are tied, and we cannot go back to the farm this season,” Lebeliani said.

He said they accumulated loan debts from 2014 to 2017 due to acute drought and diseases, which wiped out their crops.