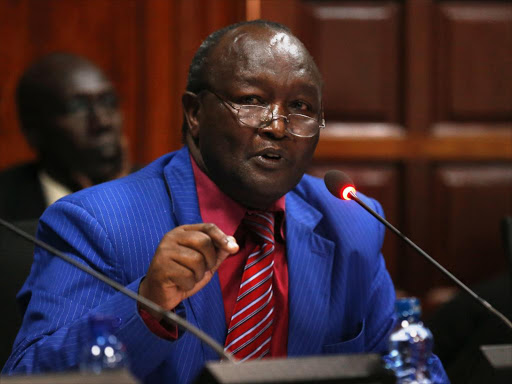 National Cereals and Produce board CEO Albin Sang before the Parliamentary Investment Committee on June 19. He was quizzed over Sh252 million spent on maize in the financial year 2014-15 /JACK OWUOR

The National Cereals and Produce Board has again failed to open its depots to start maize purchase from farmerss, despite President Uhuru Kenyatta’s directive.

“The vetting is being handled by teams from county governments, the Ministry of Agriculture and others but we hope to start taking in maize before tomorrow (Friday),” Sang said.

Farmers lined up with lorries of maize outside NCPB depots in Eldoret, Moi’s Bridge, Nakuru, Kitale and Nandi.

President Uhuru ordered the board to open its stores and buy a bag of maize for Sh2,500. More than 400 lorries and tractors lined up yesterday at the NCPB depot in Eldoret.

The board announced that it will not allow any farmers to deliver more than 400 bags. “We have made all preparations to take in maize and pay them as soon possible,” Sang told the Star on the phone.

The Strategic Grain Reserves Trust Fund chaired by Noah Wekesa approved purchase of two million bags through the board.

Only farmers in registers cleared by the county governments and the Ministry of Agriculture will be allowed to deliver maize.

The strict measures will cut out middlemen who purchase maize in large quantities from farmers at lower prices and sell to the NCPB.

North Rift governors asked the government to suspend the sale of 1.7 million bags of maize at the NCPB to millers. The government had said it would sell to millers at Sh1,600 per bag.

Uasin Gishu Governor Jackson Mandago, who also chairs the North Rift Economic Bloc, said selling the maize to millers would complicate the market for farmers. He said farmers i have more than 18 million bags of maize.

Sources said officials from the Ethics and Anti-Corruption Commision and the ministry would be deployed at the depots as monitors.

Farmers had asked the board to buy at least four million bags and not two million as planned. They protested at the Eldoret depot, urging the government to tackle crisis witnessed at the board every year during purchase of maize.

“We seem to have started over the same game where farmers are cheated. We are wondering why those in charge are not implementing President Uhuru’s order a week later,” Kenya Farmers Association director Kipkorir Menjo said. Those ignoring his orders should be sacked, he said.

The farmers demanded Treasury CS Henry Rotich to immediately release money to the NCPB for the purchase.