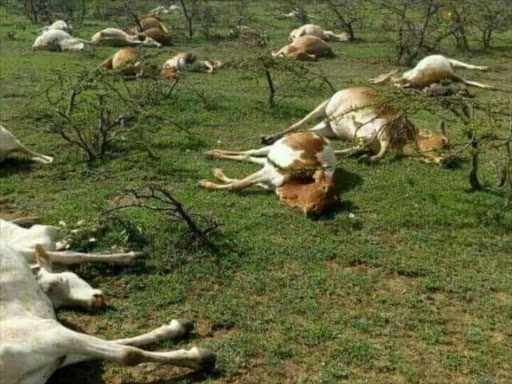 Some of the livestock alleged shot in Olmoran area in Laikipia North sub-county on November 5,2017./FILE

Police officers in Laikipia county have recovered 85 animals stolen by rustlers suspected to have come from Baringo.

The animals were grazing in the fields. They belong to three farmers – David Wandere, James Maina and Peter Ndiritu.

Laikipia county police commander Simon Kipkeu said the raiders were armed with an AK-47 and a G3 rifles.

He said they drove the animals through the Laikipia Nature Conservancy.

Police officers were informed and waylaid them at the Kuki Galmann-owned ranch, where they exchanged fire for more than two hours.

Kipkeu said the raiders could have escaped with gunshot wounds.

“None of my officer was injured, but we suspect some of the cattle rustlers could have sustained gunshot wounds. We are appealing for members of the public to assist us with information so that we can arrest the suspects,” he said