Pokot raid two Tugen villages in under a week 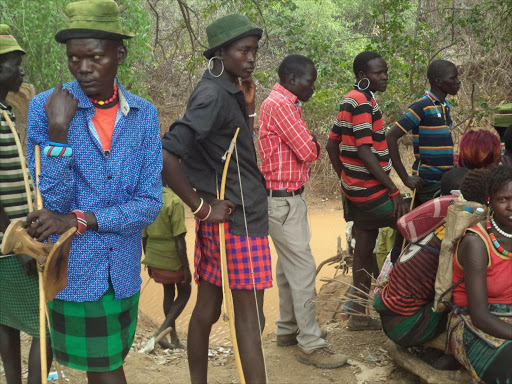 Pokot warriors armed with poisoned arrows at a rally attended by West Pokot Senator John Lonyangapuo at Ameyan, Tiaty subcounty, on February.4. More than 1,600 families are again expected to flee volatile villages in Baringo North after a series of attacks /JOSEPH KANGOGO

Tugen residents in Baringo North subcounty are on edge after they suffered three attacks in six days by Pokot bandits. The bandits attacked between February 6 and 11.

Kampala said on February 6 the rustlers stole 54 goats from farmer Joseph Kipyekomen in Loruk village at 10pm. They drove the animals towards Korosi ward in Tiaty subcounty.

On February 10 they raided the same village at night and drove away 14 goats belonging to Loruk Primary School teacher William Keserit.

Kampala said villagers tracked the animals’ prints to Chemeril and Paka hills in East Pokot. None of the animals has been recovered.

“In fact, as we speak, I have just received [information] that an unknown number of bandits is hiding in the bush ready to attack Kabsebeiwa village tonight,” he said.