Some families don't want them back or want money to accept them; some girls terrified of home.

•The cut is performed underground during the festive season.

• Some girls escape or are taken to rescue centres for five or six weeks, they learn the dangers of FGM and skills to sustain themselves. 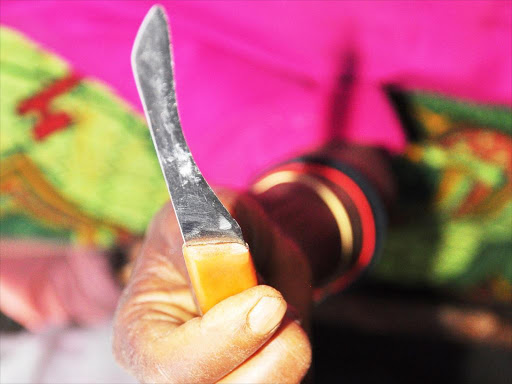 Happiness filled Taranganya Girls Boarding Primary School in Migori county after girls who had sheltered there for five weeks after escaping FGM were released to go home.

After escaping FGM ordered by their parents, many of 184 rescued girls were glad to be reunited with their families who had promised not to have them mutilated.

But a few families refused to accept them because the girls had defied them and run away. Some parents  demanded money to take the girls back. Some girls refused to go home and were disowned.

They would no longer be a source of dowry, cattle.

The mood was happy at Kubweye Girls Secondary School where another 180 girls were harboured after escaping the crime.

Many girls could not hide their joy to meet the parents who wanted to risk their lives for money.

But there was a pact that 'the cut' was done away with in their areas and it was safe to go home. Maybe.

M.B., 15, said she had been visited by both parents at the rescue camp where they learned the dangers of FGM and learned skills to sustain themselves.

“I have enjoyed my stay here. I have learnt a lot about the dangers of FGM and also gained other personal skills like baking cakes and other things," Miriam said, smiling.

At the Taranganya rescue centre, young girls got a rare opportunity to learn  skills that kept them busy hence making them feel less isolated from the unforgiving world they lived in.

They received information on the dangers of FGM and the future negative consequences of the cut.

“We are now aware that once you are cut, you risk losing a lot of blood when giving birth and also can have difficulties at the same time,” narrates A. M., a 12-year-old girl from Kuria West.

E. N. a 15-year-old student from Guitembe secondary school, cried that her parents would not accept her back, nor would they take her back to school as she had gone against their wishes.

EN had not spoken to her parents for five weeks and  she was afraid the situation would not be welcoming. She feels afraid to be taken back and chose to go to the police station where her parents would be called tosort out the problem.

A number of girls received no contacts or any visits from home during the period at the rescue camps.  This made them feel the anger or disappointment their parents must have been feeling, as they had goe against cultural norms.

Rescues camps facilitators also experienced tough times as some parents often called to mock and ridicule their efforts to eradicating the crime.

Rose Ghati, a facilitator at Taranganya Girls rescue centre, said some parents even asked for money in exchange for their children staying in the centre.

Tobias Marwa of the Zinduka programme and a coordinator for the project warns that in extreme cases where parents reject their girls, the law will be followed and such parent shall be reprimanded.

He said children below 18 years are under protection of the government and whenever any act violates their safety or protection, the law will take its course.

As schools reopen, gender stakeholders are competing with time to reintegrate girls who escaped female genital mutilation back into their homes.

In December 2022, all four Kuria clans both in Kenya and Tanzania undertook female genital mutilation which saw a high number of girls escape to rescue centres to avert the ‘cut’.

James Omondi, the Kuria West subcounty children's officer said they have contacted the parents of the girls and the community to see that the girls are moved safely back to their families and are able to go to school.

“So far, circumcision process is dying down after almost six weeks of school holidays and there is fear of underground exercise going on. We are checking on this before they are reintegrated," Omondi said.

He said already 14 Tanzanian girls who were in rescue centres after crossing over to the country to escape the ‘cut’ were taken to the immigration department and re-integrated with help of security, government and gender activists across the border.

Mabera deputy county commissioner Joy Wambua said that she had been working hand in hand with chiefs to ensure the safety of these girls.

She said parents had signed a declaration form to support their agreement on not causing any harm to the girls, no FGM or physical abuse on because they escape to rescue centres for safety.

Kuria West police boss Cleti Kimaiyo said they will still be on alert and trail rescued girls as they go back to their families and will still work hard on continuing arrests.

“While we only arrested parents and guardians we are still in hot pursuit of circumcisers who have been moving across the border and we will bring them to justice,” Kimaiyo said.

Migori county gender activists have called on the building of a rescue centre among the minority Kuria community as over 500 girls have escaped female genital mutilation during the festive season.

Benter Odhiambo, the coordinator for Micontrap-Kenya said a standard rescue centre should have a police post, a hospital, a counselling centre and schools, infrastructure that is still lacking both in Kenya and Tanzania.

Activists have called on the police and the judicial system to fast-track prosecution and judgment for cases of those that have been arrested on accounts of FGM to serve as an example.

There were 21 cases of FGM reported in Mt Elgon during the holiday.
Counties
2 weeks ago

Parents should be in the front line to protect their children against any harm.
Opinion
2 weeks ago