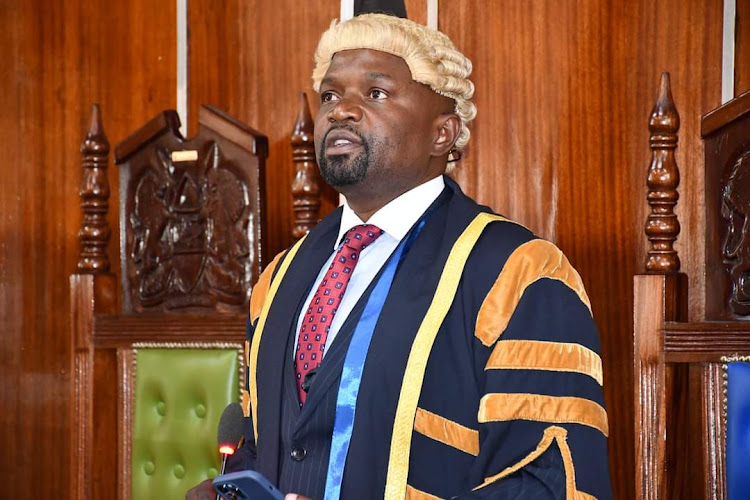 Residents of Siaya, who live and do business in Kisumu have come to defend their home County Assembly Speaker George Okode in the wake of corruption allegations in the county.

James Ojijo Odera who is also a member of the Nyanza Youth Council said the attack on Okode is unwarranted and far-fetched in matters of corruption in the county.

Ojijo wondered why Alego Usonga MP Samuel Atandi is heaping the blame on Okode while shielding former Governor Cornel Rasanga whose reign oversaw the corruption unearthed through an audit.

He said Okode is the Speaker and at no time did he oversee the implementation of projects in the county.

Addressing a press conference, Ojijo said those found culpable to have swindled public money in Siaya should be taken to court and not be shielded by politicians.

He said there is no connection between lost funds in the county government of Siaya during the time of Rasanga with Okode being the Speaker since the start of devolution.

"Edward Ouko was the government Auditor General during the reign of former Governor Cornel Rasanga, why couldn't he flag down those excess expenditures then," said Ojijo.

He called upon the leaders of Siaya to sit down and sort out the mess since the county has lost solid 10 years without any tangible development for the people.

"Governor James Orengo must start working for the Siaya people, not taking us back. He was the Senator when Rasanga was the Governor, he kept quiet when public funds were being plundered," he added.

Ojijo noted that nothing will be achieved, terming the ongoings at the county as a "wild goose chase".

He said the public is yearning for development ranging from good roads, access to water, and healthcare services in hospitals to the education of their children.

Post a comment
WATCH: The latest videos from the Star
by FAITH MATETE Correspondent, Kisumu
Nyanza
24 January 2023 - 22:28
Read The E-Paper