Says claims by the two workers are part of a calculated scheme by his detractors. 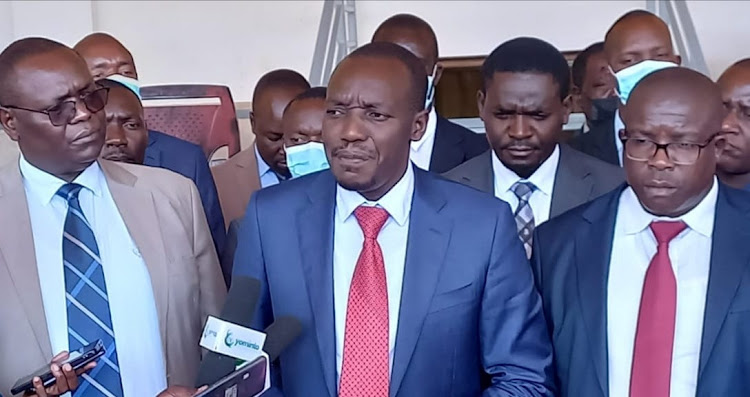 Kisii Governor Simba Arati has denied being involved in the assault on two county staff outside his office on Tuesday.

The county boss said the two were not attacked in his presence.

Arati said the claims by the two workers—Dalfant Nyatige and Job Oyugi are part of a calculated scheme by his detractors to bring him down.

The governor, who spoke at Gusii Stadium accused the pair of seeking cheap sympathy.

"I want the police to undertake a probe into the matter and take action," he told journalists outside his office on Wednesday.

While acknowledging meeting the two staff, the governor said he had did not order their beating.

"Some MCAs were even present when I was holding the meeting, there is nothing of that nature that occurred,"Arati said.

The governor spoke after political leaders among them Kisii Senator Richard Onyonka mounted pressure on him to stop the political witchhunt on county workers.

In a statement, Onyonka described the incident as despicable.

Arati said the incident will not draw him back from organising his government.

He accused the two of trying to instigate unrest against his administration after they were confronted over how and where they work.

Arati, however said there was no confrontation with the said staff.

"I was not chasing anybody home, these are idle staff," he said.

He added that the ongoing efforts to reorganise county workers will still continue.

He said his administration will not tolerate idle staff earnings a lot of money without working for it.

The assault on the two staff was also castigated by the county youth president Kevin Mosomi, who urged the police to act fast.

He said there had been a worrying trend of youth being attacked across the county for opposing politicians.

"It is sad that we are sinking this low and now we must walk around looking behind our shoulders just to be safe," he said.

Fury as leaders condemn assault on staff outside Arati's office

Senator Onyoka says the events of yesterday are shameful and sad.
Counties
2 months ago

The ongoing audit, he warned, is likely to end the careers of dozens
News
2 months ago

He said through deliberate investments in saving schemes, they will manage to ride high in life.
News
2 months ago
Post a comment
WATCH: The latest videos from the Star
by MAGATI OBEBO
Nyanza
30 November 2022 - 14:44
Read The E-Paper