Julius Ouko Odhiambo ,39, was killed by a hippo at Roo beach on Sunday 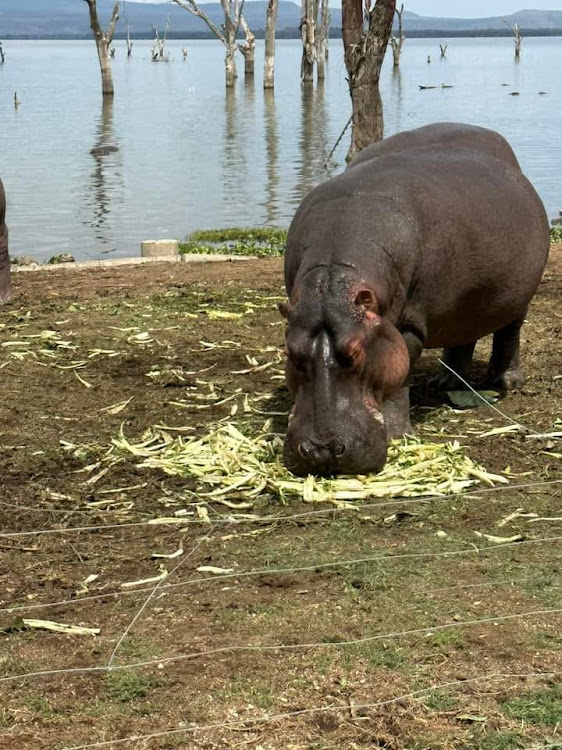 A hippo feeds at a beach in Suba South
Image: ROBERT OMOLLO

Fishermen in Suba South have called on the Kenya Wildlife Services to restrain the marauding hippos in beaches around Lake Victoria.

Hippos have multiplied in number and interfere with human activities in certain beaches in the subcounty.

On Sunday, a 39-year-old fisherman known as Julius Ouko Odhiambo was killed by a hippo at Roo beach.

Odhiambo is said to have met his death after the animal mauled him on the right arm.

He was with his colleague on their normal fishing expedition at the beach in Kaksingri ward when their boat was hit by a hippo that was wading in water.

Beaches, which hippos have invaded include Sindo, Uterere, Kiwa and others.

Suba South beach management unit chairman William Onditi said the safety of many fishermen is not guaranteed, following frequent attacks by the hippos.

“One of the hippos hit the fishermen boat before mauling Odhiambo to death. The hippos move in groups and frequently attack people,” Onditi said.

Speaking to journalists on Tuesday, Onditi said the hippos invasion interfere with their economic activities and asked KWS officers to provide a lasting solution.

He claimed many of the fishing gears have also been destroyed by hippos. The hippos do not nowadays fear people.

“The animals are impoverishing us because they destroy fishing gears, attack and kill people. Let KWS intervene to enable fishermen stop living in fear,” Onditi said.

The chairman said the lives of fishermen are at risk.

“Suba has one of the largest populations of fishermen. We are likely to witness more deaths if the animals are not tamed,” he said.

Fishermen have called on the government to save them from further attacks.

Number of illegal fishermen also declining, thanks to Coast Guard.
Counties
10 months ago

Mohammed just herding cattle near River Tana when hippo rushed and mutilated him.
News
2 months ago

• He was fishing when the hostile mother-hippo chased, attacked and killed him. • Residents urged to be watchful around the lake to avoid attacks by ...
Counties
2 months ago

They say Kenya Wildlife Service and Embu county government have ignored their complaints.
Counties
3 months ago
Post a comment
WATCH: The latest videos from the Star
by ROBERT OMOLLO
Nyanza
22 November 2022 - 14:04
Read The E-Paper