The aim is to help prisoners generate capital to set up businesses after they are set free.

• The crop is grown on prison farms and upon maturity it is harvested and delivered to Kenya Breweries Limited to generate income for inmates.

• Sorghum farming will be done in four phases. In the first phase, 100 inmates will be engaged in the production. 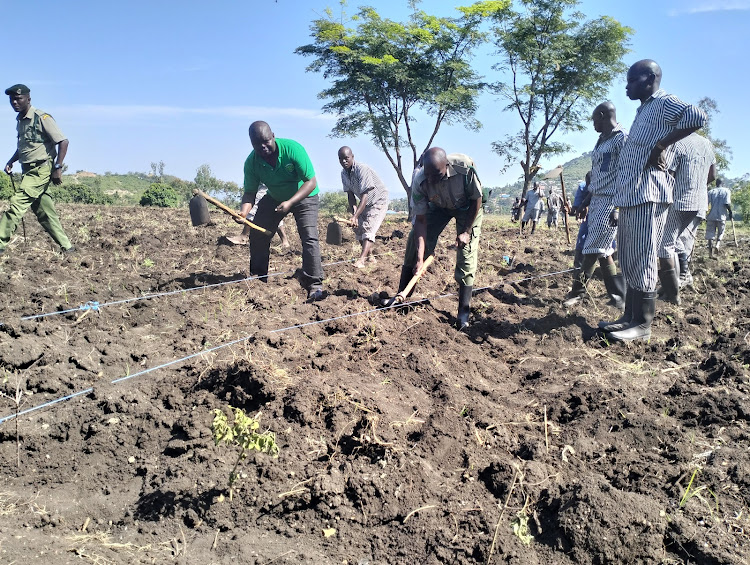 The Green Word organisation has started a sorghum production programme in Kenyan prisons to empower inmates during and after their jail terms.

The crop is being grown on prison farms and upon maturity will be harvested and delivered to Kenya Breweries Limited to generate income for inmates.

Green World is undertaking the programme in partnership with Kenya Prisons Service and Kenya Breweries Limited.

The organisation has also partnered with Kenya Prisons Service to undertake other economic empowerment programmes like poultry farming and growing trees.

Sorghum farming will be done in four phases. In the first phase, 100 inmates will be engaged in the production.

Speaking when they launched the programme at Homa Bay prison on Wednesday, organisation secretary general Isaac Otieno and his executive officer Vincent Oketch said the crop will be grown on 10 acres.

They planted the serena variety which matures in four months.

“The project is aimed at empowering people financially since there is a ready market. Inmates engaged will to earn some money from the produce and keep or send to their families at home,” Otieno said.

A number of inmates involved in the programme were the breadwinners in their families before they were caught on the wrong side of the law.

This put their families into economic difficulties when their sources of income suddenly stopped after sentencing.

Green World will extend the programme to more than 10 counties in Western Kenya.

Otieno said the partnership aims to help inmates generate capital that they can use to set up businesses after they are set free.

“Inmates are sensitised and encouraged to use their earnings wisely. Many a times we encourage them to prioritise addressing basic needs within the correctional facility,” he said.

Oketch said Kenyan prisons could play an important role in economic transformation if put to good use.

“We want to empower inmates just like we empower other citizens in the country,” Oketch said.

Ndege said they are in partnership with the organisation to help convicts reform.

He said crop farming, besides providing capital to inmates, is an example of reform mechanisms that inmates introduced to the programme will have.

Ndege said the inmates involved in the programme will acquire knowledge of modern farming practices which they can apply when they are set free.

“The society shouldn’t neglect the group. Many people consider inmates idlers at correctional facilities but we want to change it and make them acquire knowledge,” he said.

The officer estimates that the farm will produce at least 10 bags of sorghum per acre.

“We expect to harvest more than 150 bags from the whole farm. We are projecting a bumper harvest because the conditions for planting are right,” he added.

EABL will provide farmers with seeds and farm inputs at affordable prices.
Counties
2 months ago

Demand for sorghum and millet is rising, says agronomist

Former don says one can make up to Sh80,000 from an acre since a kilogram is sold at Sh37
News
7 months ago

A kilo of sorghum retails at Sh29, Egerton will buy seeds at Sh50 per kg.
Counties
1 year ago

The initiative is expected to increase inclusion of PLWDs in KBL value chain to three per cent by 2025.
Counties
1 year ago
Post a comment
WATCH: The latest videos from the Star
by ROBERT OMOLLO
Nyanza
22 September 2022 - 22:00
Read The E-Paper