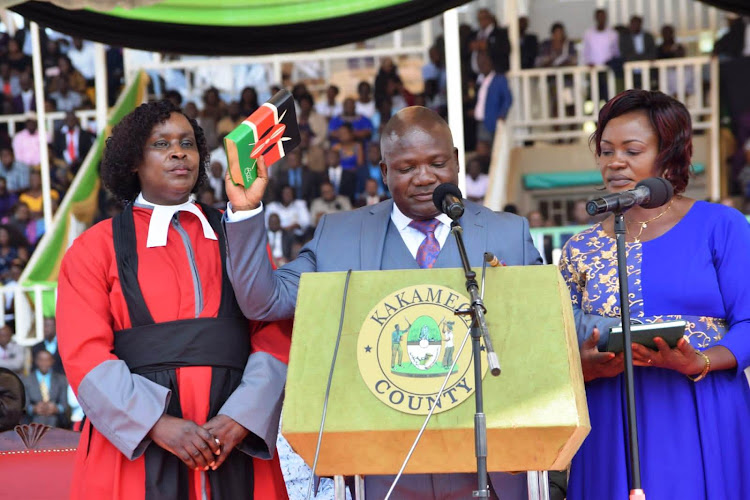 The third Kakamega county assembly will hold its first sitting on Wednesday.

The 59 elected and 30 nominated MCAs will be sworn into office by acting clerk John Simwa before electing the speaker and his deputy.

The MCA election for East Wanga ward was suspended after one of the candidates died before the August 9 polls.

Governor Fernandes Barasa on Friday gazetted September 21 as the first sitting of the assembly.

Barasa was sworn in office together with his deputy Ayub Savula on Thursday last week.

The assembly will be dominated by new faces after 45 of the 60 MCAs who served in the second assembly were sent packing by voters.

The race will be an ODM affair after the party bagged the majority of the MCA seats.

The Kenya Kwanza ward reps will provide swing vote in the race.

Barasa is said to be pushing Namatsi. He has however denied involvement in the speaker election.

Savula has declared he will play neutral role in the speaker race.

Lobbying of MCAs has been in top gear, with candidates meeting them in different locations to plot against each other.

The candidates are also lobbying based on regions they come from under the regional balance banner.

Control of the assembly is critical to the governor as it approves all county on programme besides its legislative mandate.

This, however, tends to relax the role of oversight.

Says he will rid the county of cartels, particularly at the county referral hospital within 100 days
Counties
2 weeks ago

He was sworn in as Kakamega's second Governor on Thursday.
News
2 weeks ago

They say they deserve some responsibilities to prepare them for future challenges.
Counties
3 weeks ago
Post a comment
WATCH: The latest videos from the Star
by HILTON OTENYO Correspondent, Western Region
Nyanza
20 September 2022 - 22:00
Read The E-Paper