Arati shocked by 256 employed drivers yet county has 82 vehicles

He said would investigate to know how each got his way to the County.

•Up to 256 drivers had been recruited against 82 functioning vehicles, said Arati

•Some of those recruited had no known assigned work within the county, the governor said. 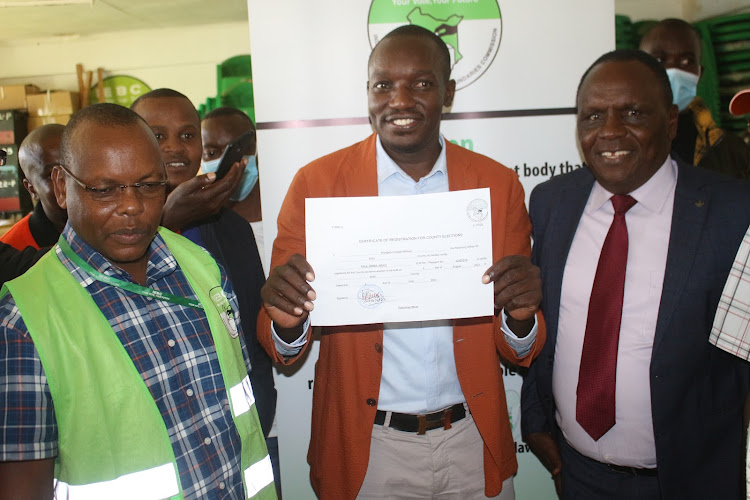 Kisii Governor Simba Arati on Wednesday expressed shock over the bloated staff employed as drivers at the devolved unit.

Up to 256 drivers had been recruited against 82 functioning vehicles, said Arati

Some of those recruited had no known assigned work within the county, the governor said.

He said he will investigate to know how each got his way to the County.

The County boss was speaking during a meeting with the drivers at the Agricultural Training College in central Kisii on Wednesday afternoon.

He also held a closed-door meeting with chief officers and committee executives at the Farmers Resource Centre.

He said his administration will ensure all staff who have been fleecing the public of its funds are arrested and arraigned.

"For a county to be safe we must inflict pain. We must fight for sanity at all costs, there will be no shortcuts," he said.

Casual scrutiny shows the County had been losing more than Sh6 million to such non-assigned staff.

"This is the amount of money, if such wastage prevented, could be used to build and equip a dispensary in the village," he fumed

At the meeting, the governor took to task the County's finance and the fleet management executives to explain the anomaly in vain.

The governor said he is ready to crack the whip on officers found to have flouted employment rules and thus allowing unnecessarily leakages of public money.

"These are issues that beg for answers and must be attended to for people out there in the street who want leadership that is clean and transparent," said Arati.

Many vehicles had not been registered on comprehensive insurance cover despite records from the finance department showing so.

Arati said he would delve into the issue in days to come to determine the extent of financial wastage the county has suffered.

He consequently ordered all drivers and their vehicles to converge at Gusii Stadium on Thursday for a headcount as part of the start of wider investigations into irregular recruitment scandals.

Arati further encouraged staff to report to him any injustices they go through in the course of their work.

"I am going to have my office open so that any staffer can walk in to share one or two jokes with me. I promise that I will not let you down if you give me credible intelligence which can help this County move forward," he added.

Arati said graft would a thing of the past as he moves to instil discipline.

He especially vowed to ensure all executives involved in the insurance scandal are punished.

"I have asked that all vehicles whether functional or not are towed to the stadium to check if they meet the requirement to be on the road. Let's meet, make sure if you're a driver with us come as well," he said Wednesday.

He said he would go to any length to ensure sobriety returns to the county.

The drivers on their part told tales of sleeping in cars for lack of per diems when they take their seniors for work-related trips.

There was a moment of drama as senior executives shifted the blame on each other in front of the Governor as he took them to task on who should be blamed for the mess in the transport department.

Separately, the governor said he has already asked for an audit of all staff working at the county.

The move comes a week after he stumbled on a 75-year-old pensioner on the County's payroll.

Arati said there are more ghost workers he will kick out of the county in a few weeks to come.

Arati warns against lethargy, corruption as he takes office

Arati took over from Ongwae who left office after serving two terms.
Counties
5 months ago

10 MPs-elect pledge to work with Arati