•He said the board has developed regulations to rate and license locally produced films to ensure the dissemination of clean content. 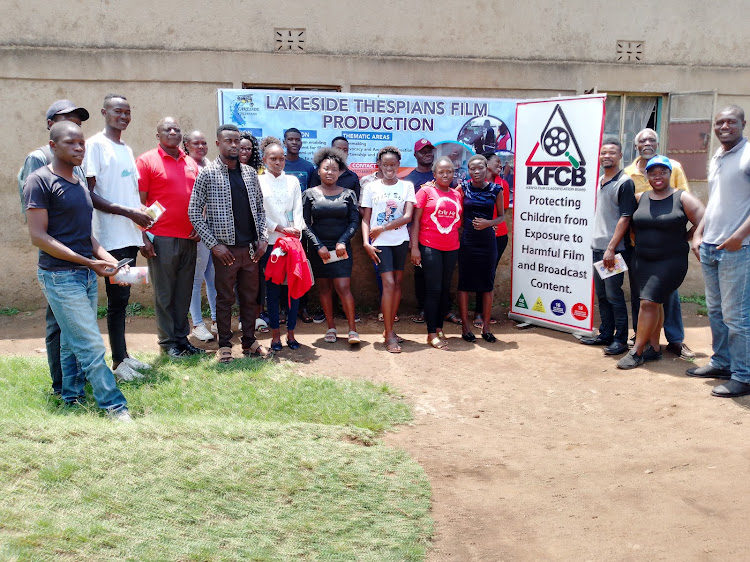 NO SEX SCENES: Lakeside Thespians Film Production crew with the KFCB members posing for a photo after the session.
Image: KNA

Kenya Film Classification Board has started training film producers in the Nyanza region on the production of clean content.

Through the training, KFCB targets to promote clean programming on the airwaves.

“Films influence behaviour and opinions thus children should be protected from harmful content which may at times inculcate bad behaviour in them,” Koech said.

He said the board has developed regulations to rate and license locally produced films to ensure the dissemination of clean content.

The regulations which classify films according to the age of the viewers, he said, required parents to be vigilant to ensure that children don’t access harmful material.

“I urge all parents and guardians to keep track of different films their children consume and ensure they are educational and safe for viewing,” Koech said.

He encouraged scriptwriters to produce material targeting to sensitise and educating the audience and promoting peace.

He spoke at Nyalenda slums in Kisumu during a training session for Lakeside Thespians Film Production, a community-based organization, composed of young actors, scriptwriters, producers and content creators.

LTFP chairman Hillary Amunze lauded KFCB for the initiative, saying it will go a long way to improve the quality of productions in the area.

Despite receiving support from different organisations, the film producers, he said, were hampered by a lack of resources to polish their work.

“We have done 15 short films and two feature films using our smartphones due to limited resources. We are therefore appealing to KFCB and other organisations to support us with production equipment,” he said

Over 50 members of the group which was started in 2017 benefitted from the free training which they said was to take their production to the next level.

KAMAU MAXWELL: Celebrate writers, honour them for their roles