He beat his main rival, Nicholas Oricho of ODM. 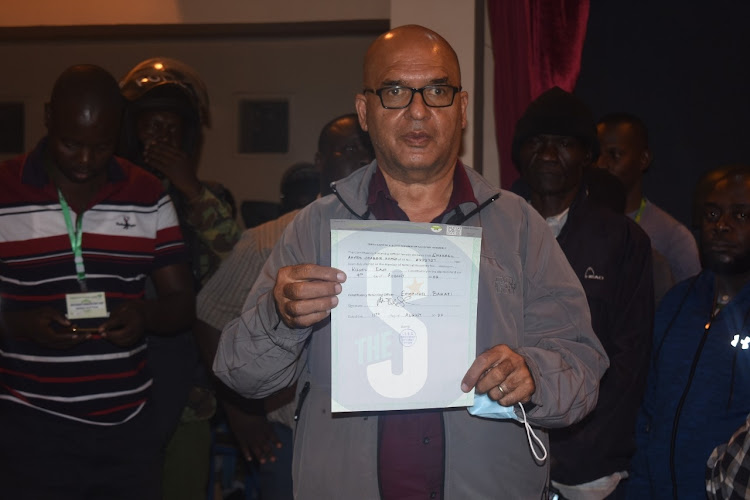 Kisumu East MP-elect Shakeel Shabbir of Independent displays his certificate after garnering 35,704 votes against Nicholas Oricho of ODM, who came in second with 28,491 votes, at Kasagam Secondary School on August 11, 2022.
Image: DANIEL OGENDO

Shakeel Shabbir, who ran as an independent candidate, has won the seat with 35, 704 votes.

He beat his main rival Nicholas Oricho of ODM, who obtained 28,491 votes.

This is the second time the MP defied the ODM dominance in the region, handing Oricho another defeat as he did in the 2017 election.

This will be his fourth term, making him the only MP from Nyanza to remain in Parliament among those elected in 2007.

The official results were announced at the constituency tallying centre by returning officer Emmanuel Bahati who handed the certificate to the MP-elect.

Security was beefed up at the tallying centre on Wednesday night ahead of the results announcement.

Only those who had been accredited by the IEBC were allowed to access the venue after a thorough search.

Speaking after he was handed the certificate, Shabbir said the will of the people has been demonstrated.

"I am humbled by the confidence that has been shown by the voters in me. It has reaffirmed that when the people have confidence in you, it does not matter which political party one is linked with," he said.

He said there is a lot to be done and he will hit the road running.

"The poverty levels are worrying. We need to seek solutions that will lead to wealth creation for our people. I'll focus more on schools infrastructure, roads, etc," he said.