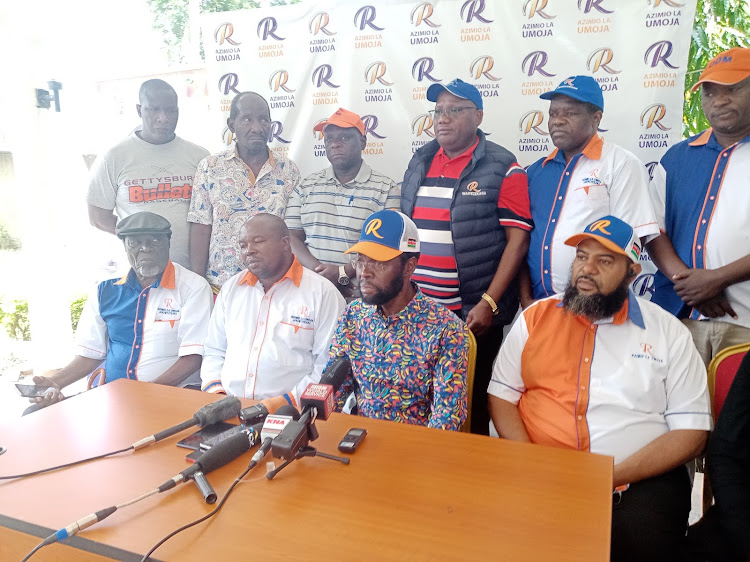 Key leaders backing Raila Odinga's State House bid are embroiled in a fight for crowd control when the Azimio leader holds his final Nyanza rally in Kisumu on Thursday.

Kisumu Senator Fred Outa has promised to mobilise Azimio supporters to attend the rally. He is supporting former Kisumu governor Jack Ranguma to recapture the seat he lost to Anyang' Nyong'o in 2017.

Ranguma is running on the Movement for Democracy and Growth party ticket. The party is an affiliate of the Azimio coalition.

But ODM leaders are reading mischief in Outa's plans and have accused the senator of planning to disrupt the meeting.

Raila and his Azimio la Umoja One Kenya brigade are expected to hold a mega rally at the Jomo Kenyatta International Stadium in Mamboleo on Thursday.

ODM officials said that Outa, during a campaign rally in Manyatta on Sunday, declared he would mobilise supporters of MDG and independent candidates to embarrass Raila and his guests.

Outa on Wednesday termed the allegations street talk, saying they were usual claims whenever Governor Nyong’o and his allies sense defeat.

He said all leaders should focus on mobilising supporters to attend the rally rather than wasting time on cheap propaganda.

“We want to have mothers of all rallies and this can only be achieved when we all mobilise Raila’s supporters across the county,” Outa said.

He told Nyong’o to fund mobilisation by hiring buses to ferry people from the seven subcounties to the venue.

“He must use money if indeed he supports Raila and is loyal to him. He cannot sit well and wait for people to do that on his behalf and wait to be endorsed,” Outa said.

However, ODM county party chairman Ayiecho Olweny said Outa’s intentions are clearly captured in his "careless and inciting speech" during the Sunday rally.

“How can he purport to be campaigning for Raila’s presidential bid yet he is publicly mobilising people to heckle him,” he said in a statement read on his behalf by Joel Oron.

Olweny termed the plans as the highest level of disrespect to Raila, especially at a time when he was close to the country's leadership that he has struggled for decades.

He called on the ODM chief’s supporters to embrace peace and turnout in large numbers and welcome him with his guests.

“As peace loving people of Kisumu, we shall hold Outa and brigade responsible for any security breach or embarrassment that will occur during the rally,” Olweny said.

Outa said those peddling such allegations were looking for political sympathy as they are the same people who make similar utterances whenever the former Prime Minister is visiting Kisumu.

He said the people who were waiting for endorsement from the Azimio presidential candidate are panicking since the ground has tilted against them and are now blaming him for imaginary things.

Outa accused ODM candidates for failing Raila and instead finding fault with other leaders who are supporting him, but are not in the Orange party.

“The rally will be peaceful and every leader should be concerned by organising transport and food to the rally attendants,” he said.

Outa said in the last rally held by Raila in Kisumu, such allegations were made against him after which he was heckled by youths paid by the same people who are now accusing him of planning to cause chaos.

He said he will not fall into their political trap but instead will focus on campaigning for Raila and supporting Kisumu MDG party candidate Ranguma.

“We need to be united and embrace peace to consolidate votes for Raila’s bid for the August 9 general election,” he said.

The governor also urged voters to come out in large numbers and vote for Raila to be the last man and woman to clinch the presidency.

The two to hold mini and mega events across 25 counties ahead of polls.
News
2 weeks ago

Raila settles for Kasarani as venue for final rally

Raila further said on August 7, they will hold an election prayer day.
News
3 weeks ago
“WATCH: The latest videos from the Star”
by MAURICE ALAL and FAITH MATETE
Nyanza
03 August 2022 - 22:00