•They received the funds from the National Agricultural and Rural Inclusive Growth Project.

•The programme is funded by the World Bank through the national government in partnership with Homa Bay county. 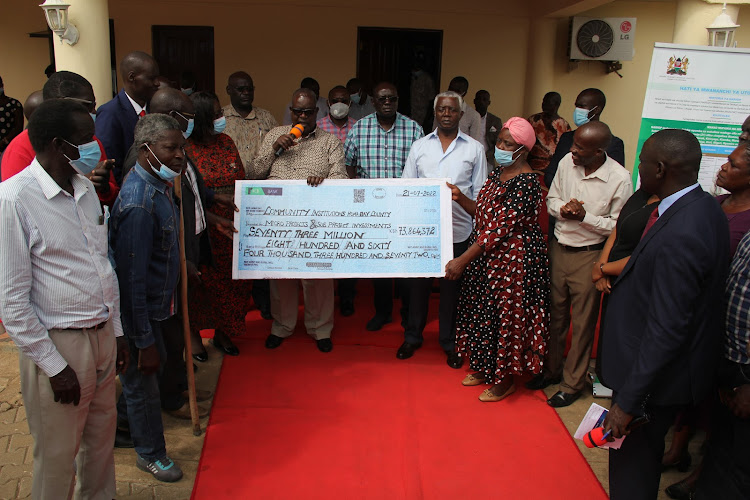 Over 18,000 farmers in Homa Bay have benefited from Sh73.8 million to boost their scale of production.

The money will be shared by farmers in 800 groups and 21 co-operative societies in Rangwe, Ndhiwa Kasipul, Kabondo Kasipul and Suba North.

They received the funds from the National Agricultural and Rural Inclusive Growth Project.

The programme is funded by the World Bank through the national government in partnership with Homa Bay county.

The farmers deal with cotton, poultry, dairy and banana production.

In poultry and dairy farming, the farmers deal with feed formulation.

In bananas, the farmers are expected to utilise the funds in undertaking tissue culture which enhances bananas yield.

In cotton, the funds will be used for the production of the crop besides establishing storage facilities.

Homa Bay Governor Cyprian Awiti and his deputy Hamilton Orata presided over the distribution of the funds at the county headquarters on Wednesday.

Awiti said the programme will enable the farmers to improve food security.

“Food security is very key. I am leaving the office next month but I will always endeavour to ensure our farmers undertake crop and livestock production,” Awiti said.

He said his county had made a milestone in promoting agriculture.

“The four value chains will improve the lives of Homa Bay residents.

Agriculture is the backbone of our economy,” Awiti said.

He told the farmers to utilise the funds prudently to ensure the money changes their lives.

“This programme is important because it empowers our farmers. Let the farmers use the money prudently for the programme to achieve the intended objectives,” Orata said.

“Agriculture should not be left for the elderly persons alone,” Orata said.

“Hunger is a serious problem that should not befall us. The government that will come after us should prioritise agriculture.”

Farmers led by John Onyango were hopeful that the programme will enable them to scale up the production of their crops and livestock.

“This is a blessing. I am going to improve the size of my banana farm,” Onyango said. Say mechanisation saves on the 30 per cent post harvest loss.
Counties
4 months ago

EABL will provide farmers with seeds and farm inputs at affordable prices.
Counties
4 months ago