The report to have them indicted was filed at Kisii Central Police station.

•They further pressed for the arrest and prosecution of a section of their colleagues that had sneaked back into the assembly after it had adjourned sine die to pass the contentious bill.

•The report to have them indicted was filed at Kisii Central Police station on Thursday last week by outgoing Masimba Ward Rep James Anyona. 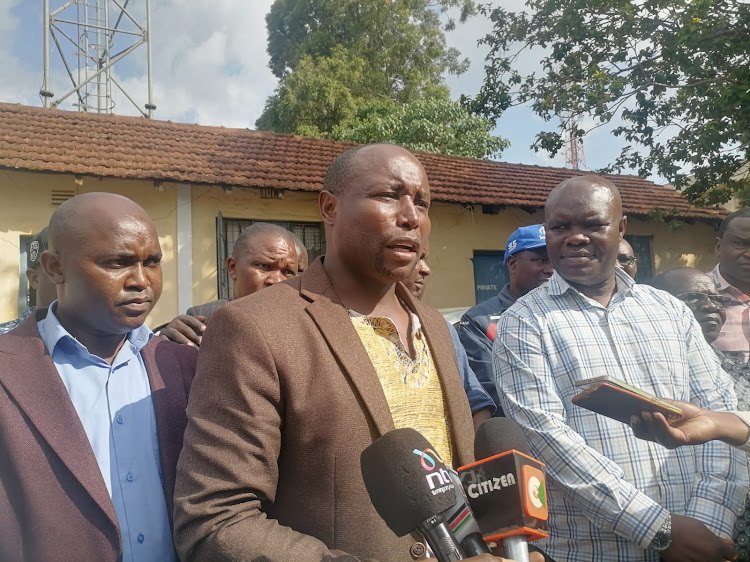 They further pressed for the arrest and prosecution of a section of their colleagues that had sneaked back into the assembly after it had adjourned sine die to pass the contentious bill.

The report to have them indicted was filed at Kisii Central Police station on Thursday last week by outgoing Masimba Ward Rep James Anyona.

On Monday they visited the station and asked the station commanders to effect the arrests of all those linked to said 'illegal bill' as soon as possible.

Masige East Ward Rep Davins Onuso who led the group accused the officers at the station of lethargy saying they are yet to commit themselves even to deploy investigators.

"The report to have them arrested was last filed close to a week now but we are being told here by the Sub-County commander that he is not privy to it yet . It is shameful," said Onuso.

The contested Budget and Appropriations Finance Bill 2022/23 was passed in the wee hours of 16th this month with some police officers deployed to keep vigil.

The pro-Arati Ward Reps accused the same officers of harassing them when they tried to make their way to the Assembly.

One MCA claimed he was roughed up and ejected from the entrance of the House over his stance.

On Friday while in Kisii, Interior Cabinet Secretary Fred Matiangi asked detectives to start investigations into the matter.

He also sought to get the list of the officers who were deployed at the Assembly.

He tasked investigative agencies in the county to probe " all the issues surrounding the contested bill with a view to taking action on the said rogue ward Reps".

The bill has already been signed into law by Governor James Ongwae.

The Ward Reps have also contested that he did so away from the glare of the media.

Ward Reps who passed the bill have too fought back rebuking Matiangi for  "acting outside his call of duty to ask for their arrests".

"He can't be policing the assembly for doing its legal duty."

"We passed the bill a day to the official closing of our calender and there is no illegality in that," Callen Magara, a nominee, said during a press conference on Sunday.

County Governor James Ongwae also rejected the accusation that he appended his signature on an illegal bill.

The Ward Reps that passed the bill also said they will not be cowed by the CS for doing their work.

On Monday, however, the pro-Arati MCA's insisted that illegality was committed.

They asked agencies that effect the disbursement of funds from the national government not to do so.

Onuso said the okaying of the bill and its subsequent passing was to allow the County to pay over 400 staff irregularly recruited recently.

"We are privy that the main purpose is to hasten the process so that the illegal recruitment can be rubber-stamped by the Assembly," said Onuso.

MCAs Amosi Onderi (Bokimonge) said they had already rejected the proposal from Ongwae to pass the finance bill on account of the employment of the staff without a due process being followed.

"First there had been no credible public service employment board when they were recruited. It saddens all of us that a day after we had closed the house, some few individuals could collaborate to sneak into the house at night to undertake a business we had put aside," stated Onderi.

They thus want DCI to stop them in their tracks saying if not stopped, money will go to waste.