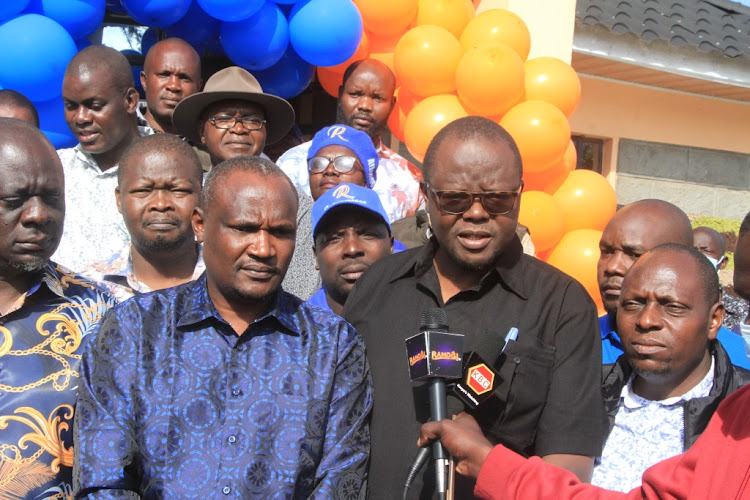 The Orange Democratic Movement has led a series of political moves in Migori county to starve onslaught by Deputy President William Ruto less than two months to August 9 polls.

Ruto’s wave in the county has been threatening to disrupt Azimio coalition flagbearer Raila Odinga in his vote backyard after Migori governor Okoth Obado decamped.

Disgruntled independent and Azimio coalition candidates have also been mounting pressure on ODM rivals in the campaign trail in thwarting six-piece voting pattern and are said to be financed by Obado.

The ODM party, most popular in the county, has been accused of having shambolic nominations which has seen a backlash in the campaign trail after handing direct tickets to several bigwigs.

On Thursday and Friday, the party under the the Nyanza Regional Azimio Presidential campaign team kicked off vigorous grassroots campaigns across the county which was only attended by ODM candidates.

The team was led by ODM chairman John Mbadi and Kisii governor James Ongwae. In some stop overs, the crowds were against the call for six-piece and saw it as an ODM and not Azimio la Umoja rally.

“This time round, we have smelled victory and we will not allow a few dissenting voices to pull parallel to our course,’’ Mbadi said in a direct attack at Obado.

Mbadi claimed the Luo community had suffered in the sustained fight for the country’s democracy since the eons of independence, and it was unfortunate that at this crucial time rebellion was cropping up.

He cautioned them against siding with outgoing governor Obado whom they said had lost political direction at a critical time when Raila was tipped to win the presidency.

“We are surprised by Obado’s move only equated to a prodigal son,’’ Mbadi said.

“The Luos have fought for presidency since independence and this time they are humbly appealing to other Kenyan communities to back their bid,’’ Ongwae said.

He said they were out to market Raila’s Presidential bid in Nyanza and that their current campaigns would not stop until they see to it that he ascends to presidency.

Ayacko is running for Migori governor on ODM ticket, while Ghati is gunning for women rep and the MPs defending their seats. They rooted for a six-piece voting pattern.

While ODM leaders have been campaigning as a team, former Migori MP John Pesa and former Rongo MP Dalmas Otieno both vying for governor in DAP-K and Jubilee Party tickets kept away from the rallies.

“What happened last week was not an Azimio rally, but a means to push through ODM six-piece and push Ayacko to us. Migori is firmly behind Raila and there is no vote which will be lost,” Matiko Bohoko, a Kuria West constituency politician supporting Pesa said.

He said they decided to keep off the rally and focus on seeking other county seats under Azimio to Raila.

Raila woos Marsabit residents with a bevy of goodies

Besides livestock insurance, he said he'l turn the county into a global livestock market.
News
1 month ago

Kiok said Raila is still a popular leader and would beat his opponents in August polls
Counties
1 month ago
“WATCH: The latest videos from the Star”
by MANUEL ODENY
Nyanza
26 June 2022 - 22:00