Only Bungoma county is behind schedule as far as CBC classrooms is concerned.

•He was speaking on Wednesday at Kodero Bara Secondary School in Migori after inspection of the completed junior secondary classes. 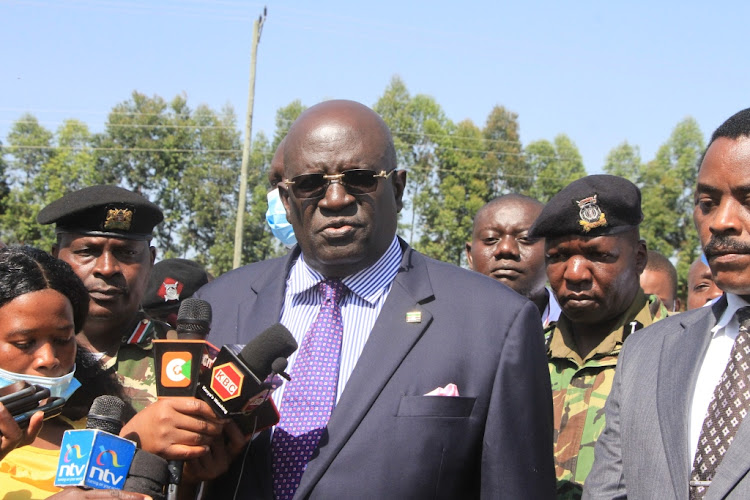 The government has called on private schools and entrepreneurs to invest in junior secondary schools to aid the transition of the new curriculum.

Education Cabinet Secretary George Magoha as said the government was on the right track to completing 16,000 new classrooms across the counties, except Bungoma.

“All counties except Bungoma have completed the classrooms for junior secondary schools. Within two weeks, we will complete 24 classrooms in Bungoma which are still behind schedule,” Magoha said.

He was speaking on Wednesday at Kodero Bara Secondary School in Migori after inspection of the completed junior secondary classes.

“It is the number we are working with as candidates in forthcoming examinations to join junior secondary," the CS said.

He said to help in ensuring the smooth operation of the new Competency-Based Curriculum, private schools and entrepreneurs should invest in Junior Secondary schools.

“Private schools should have junior secondary schools and in my tours, I have been to both public and private schools. I am not a minister of public schools alone,” Magoha said.

He said as a ministry, they have been exploiting bringing in private schools to retain their children through junior secondary school.

Magoha revealed that in Nairobi alone, over 40,000 pupils in private schools alone proceed to public secondary.

“We are encouraging entrepreneurs to develop junior secondary schools. We will ensure there are no cutthroat spaces in the transition and we are sure by December, no matter who will be the next cabinet secretary,” he said.

He said complaints by principals that the government has not released money in secondary schools was a mischievous attempt to get a loophole to mismanage money during the election transition period.

“Government will provide for all students and we have released money for this term in April. Any principal complaining should wait until the start of next term for money to be released. I won’t want a scandal after I leave,” he said.

He urged politicians to stop using the new curriculum and students' welfare as agenda in campaigns.

Magoha: We released capitation fee at the beginning of term

Magoha said services must be delivered effectively to enable children get quality education.
News
4 days ago

Says some school heads were still complaining yet the ministry had disbursed the funds
News - Page 6
4 days ago
WATCH: The latest videos from the Star
by Manuel odeny
Nyanza
23 June 2022 - 02:05