Governor says he is a product of ODM and a beneficiary of six-piece, so he supports the Senator 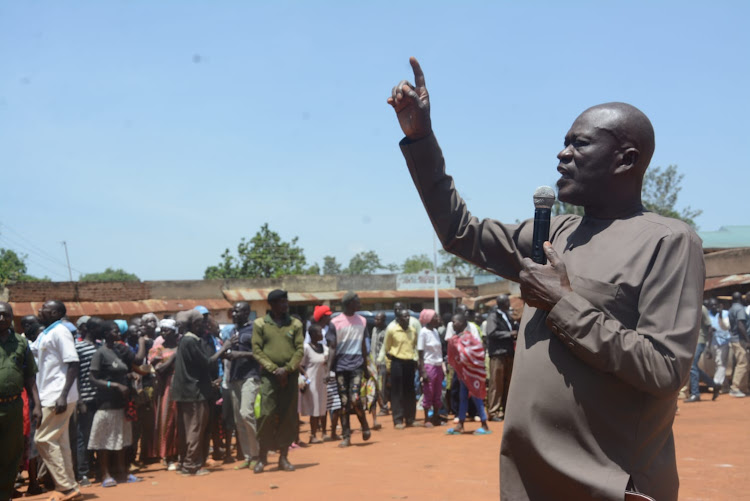 Siaya Governor Cornel Rasanga on Tuesday said he supports Senator James Orengo in the race to succeed him.

He dismissed claims that he was working with UDM gubernatorial candidate Nicholas Gumbo instead of campaigning for Orengo, who is the ODM nominee for the seat.

Orengo got a direct ticket to contest the seat in April. He is facing a stiff challenge from Gumbo, who was Rasanga's main challenger in 2017.

The contest between Gumbo and Orengo has been so stiff with opinion polls showing the former Rarieda MP is leading with a small margin.

Unlike in the past when Orengo would get elected without having campaign posters, this time things appear different.

The party's push for a six-piece voting pattern has also met resistance with the affiliate parties within Azimio asking their supporters to elect candidates based on their development records.

"I am a product of ODM and a beneficiary of six-piece.  There is no way I can support Gumbo. However,  Orengo is yet to ask me to campaign for him. He should come to me but if he fails then I'll go to him," he said.

The governor, however, reminded ODM candidates across Nyanza to stop chest-thumping and instead humble themselves during vote hunting.

"We need every voter in the region to come out and cast their ballot in favour of our presidential candidate.  We need a 100 per cent of that vote," he said.

"We can't succeed if we speak ill of the other candidates in Azimio.  We don't want to anger their supporters."

He said as a member of the regional coordination team for the presidential campaign, he was keen to ensure Raila gets all the votes.

"In regards to the presidential campaign, we must be careful not to antagonise other parties within Azimio and their candidates," he said.

Rasanga said he can't give campaign money to Gumbo as alleged because he still owes him money.

"He still owes me money, that is Sh5 million the cost of the petition which the courts awarded so there is no way I can fund his campaign," he said.

Rasanga differed with Alego Usonga MP Samuel Atandi, who said he will mop up votes in the constituency in favour of Orengo and ODM so that the speaker's position goes to his people.

"I am going to engage all political players in Alego Usonga to rally behind Orengo and ODM six-piece for 95 per cent support and take both speaker's and deputy governor position," Atandi posted on a Siaya political social media platform on Monday.

He said the issue of the speaker's position is not about Rasanga but for the people of Alego Usonga.

In the last election, Alego Usonga got governor position. Bondo took deputy governor while Rarieda got the speaker's slot.

Gem received the woman representative seat, while Ugenya/Ugunja got the senate seat.

The incumbent speaker George Okode is keen to retain the seat but the Alego Usonga brigade, led by Atandi want to ensure the seat doesn't go back to Rarieda.

"The speaker's position is not a gift to Rarieda.  They must deliver six-piece," Atandi said.

Alego Usonga will take the deputy governor position if Orengo wins. The senator picked William Oduol as his running mate.

His nominee, Oduol, hails from the populous Alego-Usonga constituency .
Counties
1 month ago

Orengo inches closer to governor ticket after rival steps down

Akinyi regretted investing time and money in traversing the county to popularise her bid
Counties
2 months ago
“WATCH: The latest videos from the Star”
by DICKENS WASONGA
Nyanza
22 June 2022 - 22:00