A litre of milk at her farm costs Sh80; same amount only buys half a litre at the shop.

•Currently, the cost of milk has gone high in the country.

•She acquired the knowledge through training and attending exhibitions. 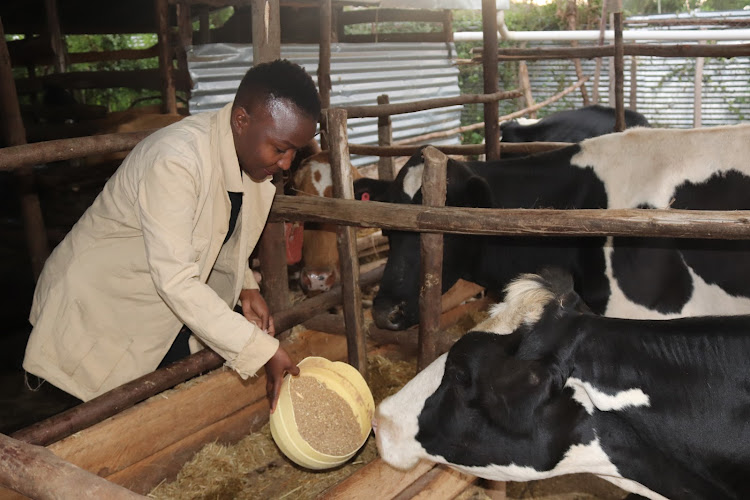 Sheila Okoth feeds her dairy cows at the farm in Rang'wena in Homa Bay town on June 14,2022
Image: ROBERT OMOLLO

Sheila Okoth,31, is a dairy farmer in Rang'wena village in Homa Bay and sells milk to families with little and average income.

Okoth was a teacher but decided to venture into dairy farming.

Most of her friends dismissed her when she started the business three years ago.

Okoth says she ventured into the business unaware it would provide alternatives to people facing financial difficulties.

Currently, the cost of milk has gone up in the country.

She acquired the knowledge through training and attending exhibitions.

The farmer says she has used up to Sh3 million for her business.

Some of the operation costs include building cow sheds and purchasing more animals.

She bought each animal Sh250,000 and currently has ten cows.

“I don’t discriminate against people. I accept those who are struggling with the high cost of living to get milk from my farm,” Okoth says.

Every day, people come to her farm for cheaper milk.

Okoth says the business has opened her eyes to the potential of the dairy business, especially in Homa Bay where milk products come from other counties.

She says demand for milk from her farm has increased in the last two months and has challenged her to expand her business.

Okoth says she had to adjust her daily routine when the number of customers increased in March.

“I sell milk at half the price of what is sold at the supermarket and retail shops,” she says.

A litre of milk at her farm costs Sh80. The same amount only buys half a litre at the shop.

Her cows feed on vegetables sourced from the market, this is supplemented by nappier grass, maize and lucina which are locally sourced.

Other feeds include ground hay and yeast which are fermented using molasses. Salt leak is added to the diet for minerals.

The milking shed has put speakers which are used to entertain the cows during the milking process.

She says music makes the animals relax and produce a lot of milk.

Morning milk production is usually between 90 to 100 litres.

Two of the cows however produce extra milk.

Okoth says the two animals are milked at midday and she gets 35 litres.

“The milk is instead kept until the evening before being delivered to a shop where customers from town can purchase it,” she says.

One of the greatest challenges that the farmer faces is adequate water as each animal uses up to 200 litres per day including cleaning their shed and drinking.

Homa Bay town has been suffering from a perennial water crisis.

To overcome the challenge, she harvests rainwater in a 5000-litre tank. But this is only effective during rainy seasons.

“I turn to my pocket when it does not rain. It costs Sh1000 to get water daily. I will however dig a borehole that will end this problem,” Okoth says.

Another challenge which all farmers face is the high cost of feed which Okoth says the governemnt should address by lowering taxes.

On top of the list is an adequate feed which the specialist said should be rich in protein for maximum milk production.

For effective animal maintenance, he says, dairy cows should be put on a special diet.

Health is key in dairy production and Amenya says animals should be regularly sprayed with pesticides to control ticks and other pests.

“Dairy cows are highly susceptible to tick infection. A serious farmer should ensure his animals are always pest and disease free,” Amenya says.

Okoth has a veterinary officer who checks on the animals.

His duties include checking for pests and diseases and servicing the animals through artificial insemination.

Amenya says servicing dairy animals should be done at regular intervals after the second month of carving. 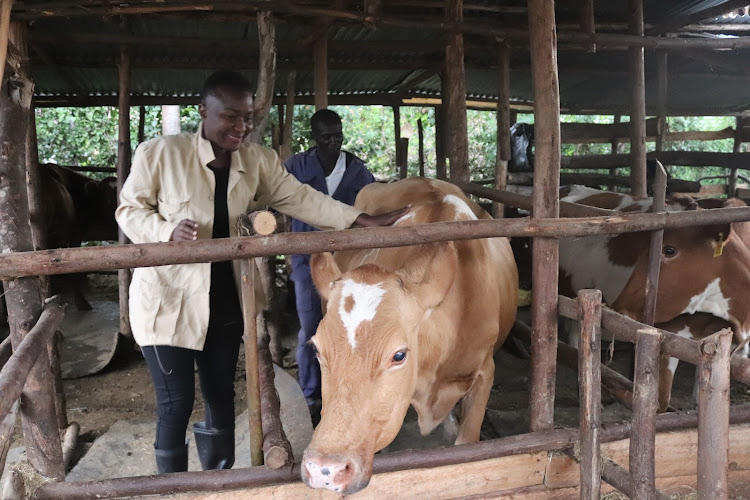 Shiela Okoth with one of her dairy cows in Rangwena farm in Homa bay on June14,2022
Image: ROBERT OMOLLO

Demand for traditional African vegetables that contain medicinal value is high
Counties
1 month ago
“WATCH: The latest videos from the Star”
by ROBERT OMOLLO
Nyanza
16 June 2022 - 22:00