Tension builds in Kisii as Raila arrives for vote hunt

•On Friday, Arati dismissed the parallel campaign board set up by the Ongwae 's team. 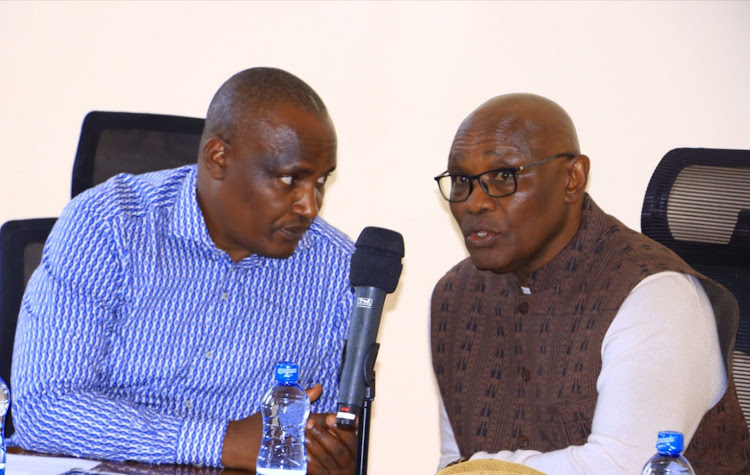 Governor James Ongwae during a meeting Friday with Suba MP John Mbadi. Ongwae is said to be a tug of war with Simba Arati over the establishment of Raila campaign teams in Nyanza.
Image: PHOTO BY MAGATI OBEBO

There were some reports earlier on that Raila was planning to postpone the visit due to the infighting but the ODM party dismissed the reports, saying the visit would go on as planned.

"We are not aware of any plans by Raila to postpone the visit. He is coming, the rest is hearsay," Kisii ODM chair Kerosi Ondieki told the Star on Sunday.

The two - Ongwae and Arati - do not see eye to eye, with each establishing a parallel campaign team ahead of the scheduled visit by Odinga.

On Friday, Ongwae hosted Suba MP John Mbadi at his other offices at ATC in central Kisii, where they jointly stated the planned visit by Odinga to Kisii.

Ongwae said they had already established an Azimio campaign team with the primary focus of marketing Odinga as the preferred candidate for the presidency.

"The Nyanza region presidential campaign has been established with broad consultations with all regional and county coordinators as well as respective county campaign boards," said Ongwae in a statement.

A similar campaign team was set up on Tuesday last week by Simba Arati.

On Friday, Arati dismissed the parallel campaign board set up by the Ongwae 's team.

"As you aptly put it, he is outgoing and should use the remaining time to pack and prepare to leave office," he told journalists at Junction hotel where members of the parallel team were meeting.

Ongwae had been joined by governor candidates Sam Ongeri, Chris Obure(Kisii) and Timothy Bosire (Nyamira) during the function.

He promised to deliver at least 95 per cent of the votes to Odinga's basket.

County Public Secretary Patrick Lumumba heads the team. No announcement has been made on other officials on the board.

Raila maintained he has the best manifesto for the country.
News
5 months ago

Hidden pangas found in Kisii bar ahead of Raila tour