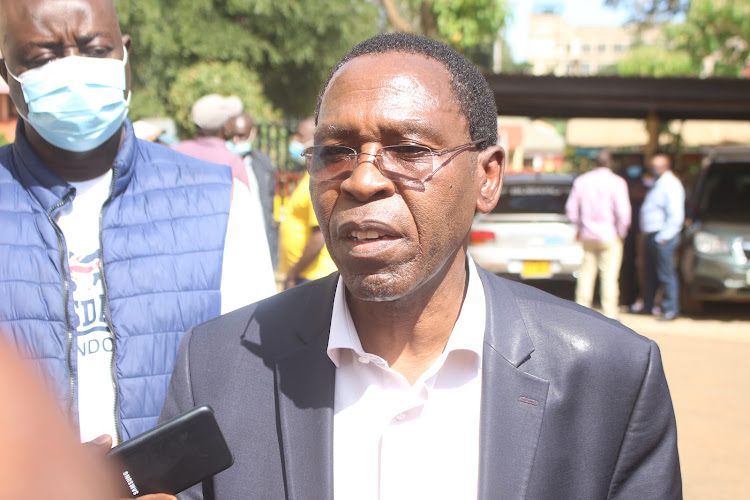 Asanyo accuses Angwenyi of poor leadership saying it is now time the electorate had a change of guard.

The aspirant said Kitutu Chache North is currently a scene of desperation where a half of its people suffer deprivation because of poor leadership.

"You walk  from one corner to the other and all that  greets you are sorry sights of underdevelopment, no road, no school with worth structure to talk of," Asanyo said during a press conference at his office.

The politician further spoke of skewed bursary allocations and graft.

He said residents deserve a leadership that is keen on improving their lives and not handouts.

"Slowly we must wean our people out of the handout culture which continues to contribute immensely to underdevelopment in the region."

The tycoon will be facing Angwenyi, 75, on the ballot on an Orange Democratic Party ticket.

Also in the race is Japhet Nyakundi (UDA) whose fortunes are quickly climbing. Politician Don Bosco went independent after losing in the UDA party nominations.

Asanyo told journalists that the August decision by the electorate in Kitutu Chache North would be a defining one.

"It will be development versus a status quo using dirty tactic in a desperate effort to succeed itself.

"Our people are anxious for a change that gives them hope, a change that will capitalise on the millions thrust into their coffers through the CDF to give them meaningful development projects that can change their lives for the better," Asanyo said.

The pathetic state of infrastructure both on roads and schools are a factor as the aspirants square out with Angwenyi.

The MP, who is Deputy Jubilee Party chairperson is the longest serving legislator from the larger Gusii region.

Asanyo told the Star some people were using goons to reign terror on other aspirants' campaigns during this electioneering period. He said they have already asked security agencies to be on high alert and ensure the culprits are arrested and prosecuted.

"Yes there appears to be a pattern of violence which we condemn. We want nothing but peace and I urge my competitors to be agents of peace."

Aspirant Don Bosco was injured after goons pelted his convoy with stones as he was leaving a rally in Monyerero township.

Asanyo  said such incidents were giving the region a bad name.

“We want to provide what has not been delivered by those who have been in leadership for the last 20 years. We know how to do that and we are telling our people to support us in delivering them from poor leadership,” he said.

Close ally of Raila hopes to unseat longest-serving MP in the National Assembly.
Sports
5 months ago

The MP urged locals to instead take suspected witches to the police.
Counties
8 months ago
“WATCH: The latest videos from the Star”
by MAGATI OBEBO
Nyanza
15 May 2022 - 22:00