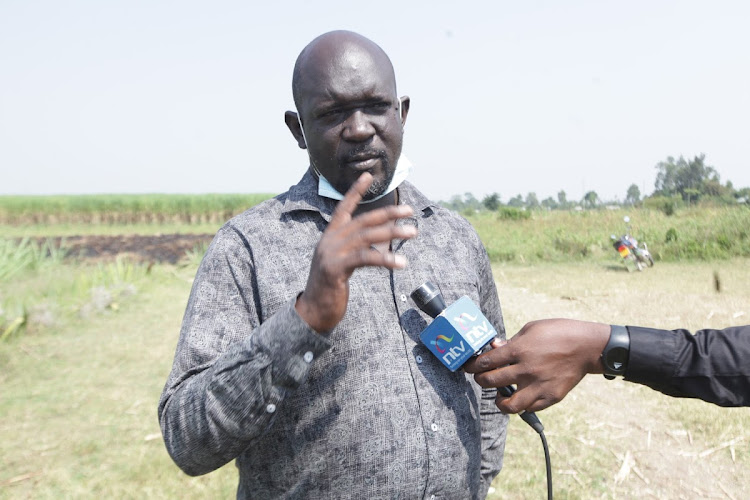 Sugarcane farmers from Miwani have opposed government plans to buy 3000 acre of the vast Miwani Sugar Factory from a private developer.

Farmers under the Kenya Sugarcane Growers Association termed the move fraudulent since the land already belongs to government.

They spoke during a public participation meeting held by the National Land Commission in Muhoroni.

Ogendo noted that it was ridiculous that a company can come from nowhere and claim to ownership of the land.

“If government wants to build a Special Economic Zone the people are willing to give the land for free. Government must not pay anybody for the Miwani land,” he said.

Ogendo noted that they have told officers from the NLC that at no point will they allow public land to be issued to a private developer.

“If the government wants land, it’s theirs they can come, demarcate and proceed with the development they want," Ogendo said.

"It’s their land, they are holding for us in trust. But you cannot pay criminal enterprise tax payers money that is fraud."

“This company has been under receivership for so long. The land issue should be dispensed, to pave way for a multi billion project," he said.

Early this year, MSC through its lawyers accused suspected government officials of fraudulently attempting to acquire 3,000 acres of the land through a private investor called Crossely Holdings Limited.

The sugar company through its lawyer David Otieno revealed that there was already a gazette notice dated February 25, 2022, issued by NLC chairman Gershom Otachi.

Otieno said this was a situation in which the government is buying its own property from somebody whose tittle is being challenged in court.

According to the notice "Pursuance of Land Act, 2012, part VIII, the NLC on behalf of the Ministry of Industrialisation, Trade and Economic Enterprise Development, gives notice that the national government intents to acquire the following parcel of land for proposed Kisumu/Miwani Special Economic Zone in Kisumu county."

The plot number is L. R. No. 7545/3 registered owner is Crossley Holdings Limited.

"Plans for the affected land may be inspected during office hours at National Lands Commission, Nairobi and the Ministry of Industrialisation, Trade and Economic Enterprise Development, Nairobi," the notice read in parts.

The MPs want to know who sanctioned the take over.
News
2 months ago

One killed, several injured during alleged takeover of Miwani Sugar

Rowdy youth allegedly from Crossley Holdings stormed the factory claiming they had a court order to take control.
News
2 months ago

Appellate Judges said evidence left great doubt as to the proof of the offence charged.
News
6 months ago

The factory with dilapidated machines is under receivership alongside Muhoroni Sugar Company
Counties
6 months ago
“WATCH: The latest videos from the Star”
by FAITH MATETE Correspondent, Kisumu
Nyanza
10 May 2022 - 22:00