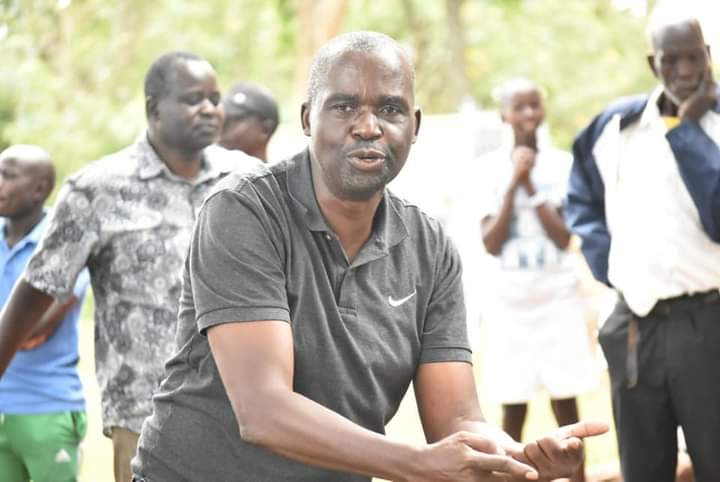 The ODM party is dying a slow death and might not even be there in five years , Siaya governor aspirant Nicholas Gumbo has said.

The former Rarieda lawmaker who is seeking to succeed Governor Cornel Rasanga says the Raila Odinga-led Orange party has a history of bungling nominations and that will kill the outfit.

Gumbo is vying under the United Democratic Movement party after quitting ODM.

ODM is fighting a rebellion and what is shaping up to be a protest vote in its Luo-Nyanza stronghold after it handed direct tickets to aspirants against the wishes of supporters.

This culture, Gumbo says, is already squeezing the breath out of the party and that it will close shop as soon as Raila is elected president.

“There will be no ODM in Nyanza after Raila's exit. He is going to be the president under Azimio la Umoja-One Kenya Coalition and ODM will be a useless party as soon as he leaves office,” Gumbo said at his home in Lwak, Rarieda.

Gumbo said 2022 will be a political reawakening moment for the entire Luo Nyanza, where the ODM has been the dominant party.

“It will be a well-deserved political emancipation of the entire Luo community if John Pesa and Evans Kidero can be elected governors of Migori and Homa Bay counties respectively and Gumbo for Siaya,” he said.

Pesa is competing against ODM's Ochilo Ayacko in Migori, while Kidero will face off with Gladys Wanga in Homa Bay as an independent candidate.

"As we speak, MPs Gideon Ochanda (Bondo), Elisha Odhiambo (Gem) and Samuel Atandi (Alego Usonga) do not know whether ODM has forwarded their names to the Independent Electoral and Boundaries Commission despite having won at the ballot on April 13," he said.

“Their nomination certificates have been or are likely to be cancelled in favour of some people. In Bondo and Alego Usonga, the tickets are likely to go to women aspirants who are less popular."

ODM already snatched the ticket from Odhiambo and handed it to his rival Jalang'o Midiwo. A tribunal last week ordered that Odhiambo be given the ticket.

Gumbo exuded confidence that he is poised to be the governor of Siaya since he is currently enjoying a lot of goodwill in his campaigns.

Apart from his decade-long track record as MP, which he says is perfect, Gumbo is taking credit for using his ‘Resa’ (Save me) Foundation to save needy children who are thirsty for education.

Orengo, Gumbo said, has not participated in any competitive election for about 20 years of his over 40 years in politics thus finding it rough campaigning on the ground.

“Honestly, my brother Orengo is struggling to rally the people to support him ahead of the general elections,” he said.

“The electorate are conscious enough to remind him that Siaya has lost 10 years of devolution and he too is not a development person."

He said Orengo has become too old and cannot withstand the heat to conduct a series of rallies in a single day, even with less 100 days to the ballot.

Of the 30 wards in Siaya, Gumbo said Orengo is unpopular in 29, including his Ugenya backyard, where he was the MP for the longest time.

“Orengo is only popular in a single ward in Ugunja constituency. He would have been disadvantaged if Odhiambo and Atandi won in Gem and Alego but that is not happening," Gumbo said.

“It is true they tried to snatch my running mate Charles Owino away by offering him a lucrative job back in the police service. I thank God that they have failed,” Gumbo said.

Owino, just like Gumbo, is regarded as a terrific grassroots mobiliser, and who adds to the team, the courage and knowledge on how to guard votes against rigging.

Owino lives in Ugenya subcounty but with roots in Alego Usonga subcounty.

In 2017, when he first stood for governorship, Gumbo recounted that he miscalculated and focused on Rasanga, who was not his real opponent.

“Orengo is not my real opponent. This time around I know who my real opponent is and it is there where I have focused my energies,” he said in an apparent reference to Raila and the ODM six-piece narrative.

He hopes for political multi-partism in the region.

If elected, Gumbo is promising to convey clean and safe water to households, make Siaya an agricultural hub, weed out corruption and educate all needy children.

The Siaya governor hopeful says he stood with the legislator when others deserted him.
Nyanza - Page 29
1 month ago

Julius Okinda and Tony Yogo, who are running as independents. The other contender is James Wamban.
Counties
3 weeks ago

Raila’s headache is throbbing in his Nyanza political turf.
News
1 month ago

Owino has joined UDM party together with Gumbo who he will deputise.
News
1 month ago
“WATCH: The latest videos from the Star”
by JOSIAH ODANGA
Nyanza
09 May 2022 - 22:00