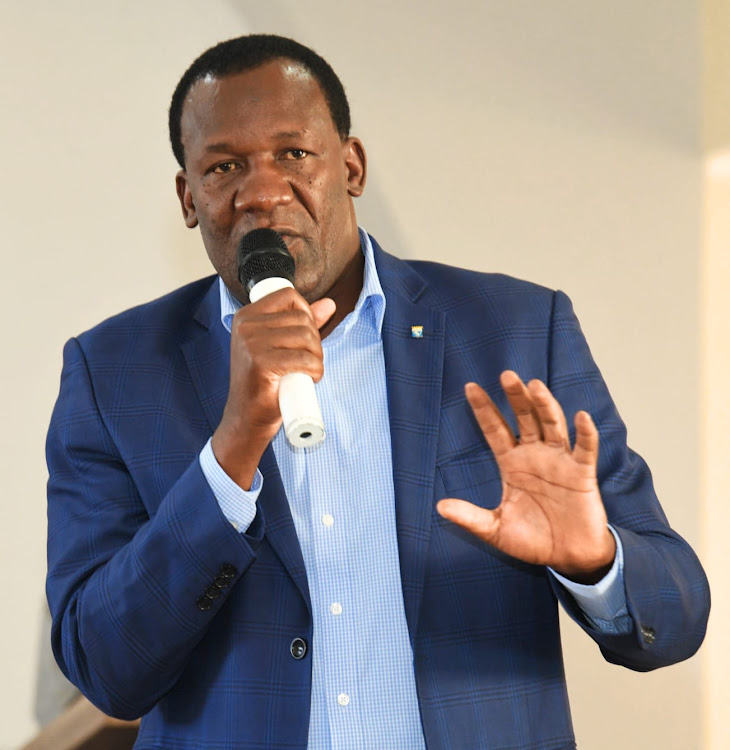 LEGACY: Abala Wanga at a past public function. He has quit LREB as CEO
Image: DICKENS WASONGA

Abala Wanga has hang up his boots as CEO of the Lake Region Economic bloc.

Victor Nyagaya, who was the investment secretary and donor liaison officer in the Kisumu Governor’s satellite office in Nairobi, takes over as CEO.

The bloc was created in 2014 and Wanga became its first CEO.

He later resigned from the outfit in August 2019 but was re-appointed as CEO last June by Kakamega Governor Wycliffe Oparanya who chairs the bloc.

The outgoing CEO says he is happy that he leaves behind a formidable outfit that now has global partnerships and recognition from a nondescript organisation.

"We have been able to enhance public joint investments in capital securities through resource mobilisation, using this outfit.

"We started from a small office with no furniture. As I leave, LREB is now a global organisation. I am happy about this feat," he said during a Sunday interview with the Star.

According to the outgoing CEO, LREB was born out of the understanding that it could enhance strategic connections,  between the lake region counties with shared economic interests.

"The bloc provides an effective means of creating remarkable development impact across the member counties," he said.

The Lake region is one of the most densely populated regions of Kenya with over 14 million people. This constitutes to about 30 per cent of Kenya's population.

"The bloc presents the socio-economic aspirations of 14 counties in the Lake Basin Region and seeks to boldly secure and shape the region’s destiny," Wanga said.

"It is seeks to, address constraints and define key steps that leaders and citizens of the region can take to transform the shared vision of prosperity into reality," Wanga said.

The outgoing CEO said a partnership between these counties is essential, timely and creates a practical framework through which county governments can harness the abundant natural resources, build on existing strengths and address challenges.

He said that the bloc coordinates and facilitates service delivery and development on behalf of the stakeholders.

The outgoing CEO said he was satisfied with the process of institutionalising LREB, particularly with the passage of the LREB Bill 2018 in the 10 member counties.

"The four remaining counties are in the final stages of its enactment and assent," he said.

The projects included a regional bank, expansion of maritime transport across Lake Victoria and associated services, sugar sector revival and conservation of the water towers.

Last year, the bloc resolved to also focus on the cotton, textile and apparel sector as another key flagship project.

During a summit in Kakamega in 2020, the bloc's chairman said it was going to partner with state agencies and universities to develop and implement a strategy on cotton, textile and apparel revival.

The institutions included KALRO, LBDA and universities like Maseno and Jaramogi Oginga Odinga University of Science and Technology.

This was to help reduce poverty and unemployment in the region.

"On maritime transport and associated services, we are satisfied with the progress made in the refurbishment and modernisation of Kisumu port," Oparanya said.

The governor said development of the port will open up the lake region and the country into intra and international trade.

On sugar, Oparanya said the hand over of the sugar taskforce report and that on maize to President Uhuru Kenyatta paved way for the implementation of key recommendations. If implemented, will ease the burden and suffering of the residents.

Wanga said the bloc had agreed to collaborate with institutions of higher learning on research, technology and innovation for socio-economic development of the region.

"We wish to thank the Chinese government for the support it has lent to the LREB particularly in capacity building and in expressing their interest to put up a model farm in our region," he said.

He added that LREB is soon opening an investments liaison office in China.

"We also wish to communicate our gains in doing business with the Russia Economic Forum.

"LREB will be supported by the Russian firms and government in the fields of telemedicine, research and development of specialised medical institutions," he said.

Wanga who is the Kisumu city manager joined Nyong'o's administration as the director of administration, serving for three months.

He became interim head of secretariat at LREB before being crowned CEO.

"We built the young organisation from scratch, under the close leadership of Governor Nyong'o despite LREB's creation during Jack  Ranguma's time through Ford foundation and Deloitte," the outgoing CEO said.

Agreement binds governors in the 14 counties that form LREB to promote peace despite political alignments.
News
5 months ago