• The endorsement and installation as an elder gives Obino the required blessings to emancipate the constituency from poverty. 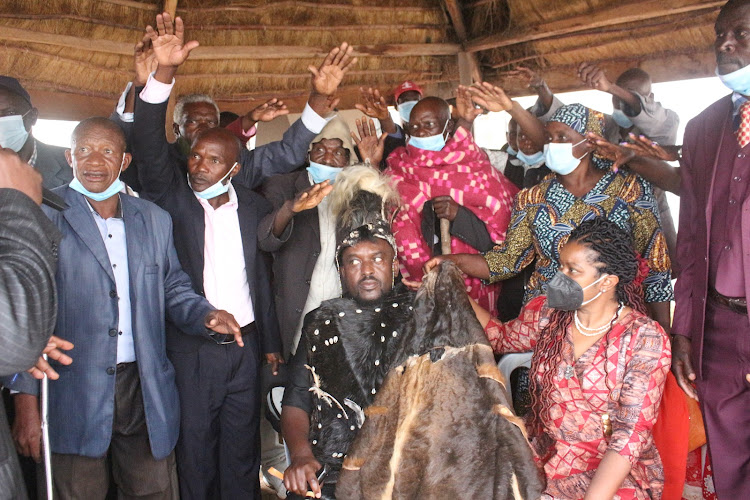 POLITICAL NEWSMAN: Veteran editor Eric Obino made a Kisii elder and endorsed to run for Nyaribari Chache seat by elders at his Bobaracho home on Friday, January 21.
Image: ANGWENYI GICHANA

He was also installed as an elder on Friday.

The colorful event was attended by hundreds of supporters who thronged his Bobaracho home.

Elders said the endorsement and installation as an elder give Obino the require lessings to emancipate the constituency from poverty.

Obino was the Sunday Nation Editor before he moved to Media Max's People Daily. He is exiting journalism to enter politics.

He would seek to run on the ODM ticket if he wins the nomination.

"I thank the elders and I am sure this is a testament to the trust the residents have in me to represent them in Parliament," Obino said.

He promised to reclaim the constituency land, which has been grabbed.

"We must stand to reclaim to what is rightfully ours and this begins with the large swathes of territories that have been carved off to other political territories,"Obino said.

He deplored the high level of poverty in the constituency, saying he will fight for more funds to help women set up entrepreneurial business.

"I assure you  we shall fight for more resources to ensure this is achieved," he told an enthusiastic crowd of more than 1,000 people.

Obino asked why a multibillion water project could be set up in the constituency when no resident was yet connected with piped water.

"We had thought such a project would be helpful to our people which is not the case now. I promise this [lack of resources] will be a thing of the past when you elect me," he said.

He said being a journalist has given him insight into politics. He said he would inject the needed accountability that he had been pushing for in newspapers.

The constituency, he said, has been taken hostage by bad politics.

"One could expect that the youth being the engine of development, would be given priority by our leadership but what you can see around are youth who are disillusioned," he told the Star.

Hundreds of school going youth are not accessing bursaries from the constituency development fund, he said.

This undermines the gains that should be made, he said. "It is a pity. I assure you these are some of the issues I would want quickly addressed so we don't keep burying the aspirations and dreams of our youth," he said.

Obino hails from the dominant Kamba Nane's Mwamobea clan whose tenure of  leadership was only interrupted by Richard Tongi of the relatively small Abaguche clan.

It has logged six MPs so far since it was formed .

MP Richard Tongi, a moderate Jubilee Party member, would be fighting for his third term in the August polls.

Others in the race are Zaheer Chanda, a darling of the youth and a majority of women voters. Chanda is largely known for his flamboyance and magnanimity with cash as he campaigns for the UDA ticket. 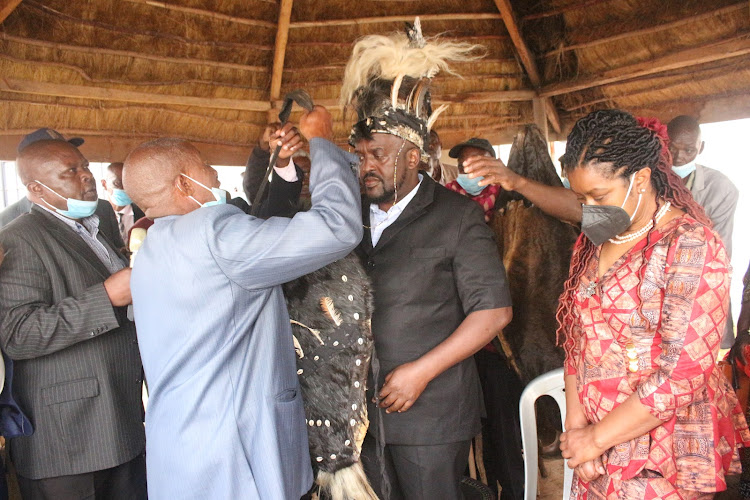 LEAVING JOURNALISM: Veteran editor Eric Obino when he was made a Kisii elder by elders at his Bobaracho home on Friday, January 21.
Image: ANGWENYI GICHANA

He often claims he won against Tongi but his victory was stolen.

On Friday Obino said Nyaribari Chache as constituency should start on a new slate.

"We are still at the lower rungs of the development index, this is courtesy of political brokerage. Everywhere I go, people are crying. It is either a farmer shortchanged or a youth who has been conned of his aspirations."

He spoke of a fresh development blueprint that can aid transformation of  the region.

Initially, he said, the constituency was doing well growing coffee but profits have ebbed.

He spoke of deplorable infrastructure and lack of women's empowerment.

"As we start this phase, let's remember that God has already picked a leader, we are only here to anoint  him as signature of approval," he said.

Use second phase to register as voters, Kisii residents told

Governor Ongwae says through this, residents will elect leaders of their choice
Counties
1 year ago

Says he will not hound him over graft, will take care of him as a grandson would
Counties
1 year ago
Post a comment
WATCH: The latest videos from the Star
by MAGATI OBEBO Correspondent, Kisii
Nyanza
23 January 2022 - 22:00
Read The E-Paper