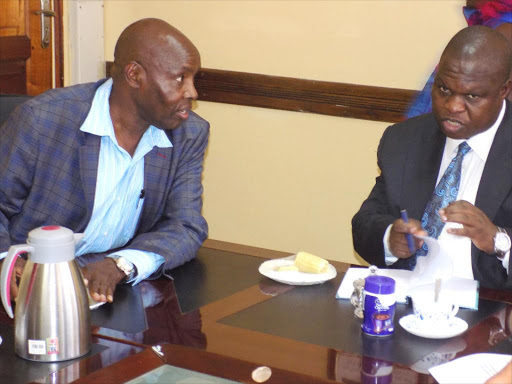 The team, he says, consists of former Kisii Finance chief John Momanyi who will be his running mate and Esther Nyamwamu as Woman Rep.

The legislator spoke to journalists on Wednesday at his Kiomiti home in Nyaribari Masaba during the burial of his mother Sibia Ombaki, 93.

He said more candidates would be roped in ahead of intensive campaigns from Sunday next week.

The Nyaribari Masaba MP is campaigning on his development record as he woos voters to back his bid.

"Our people are in need of development something that I am good at. It is evident from what I have done in the constituency," Machogu said.

He told Kisii residents to vote him in on account of his development record.

This, he says, puts him in good stead to enhance service delivery and push the county forward when he secures the seat.

Machogu had been a district commissioner before trying his hand in politics.

He won hearts of the electorate in the 2018 polls, becoming the fourth Nyaribari Masaba MP after James Omanga, Hezron Manduku and Sam Ongeri.

Ongeri is also in race for the governor's seat.

From Nyaribari, Rachel Otundo and Charles Matoke are also fighting for the seat.

Machogu said while he is aware of the increased number of contestants from his backyard, he does not feel daunted.

"What is seen as an expanded list is an indication of flourishing democracy and healthy competition," he said.

Machogu assured staff that he would not victimise anybody when he becomes governor.

"As one who has been in government service, my work is to ensure that each worker's rights are respected and guaranteed," he said.

He said if elected, he would consider each clan during allocation of seats.

Says every Kenyan has a right to contest for any seat irrespective of age.
Counties
2 weeks ago
by MAGATI OBEBO Correspondent, Kisii
Nyanza
13 January 2022 - 22:00