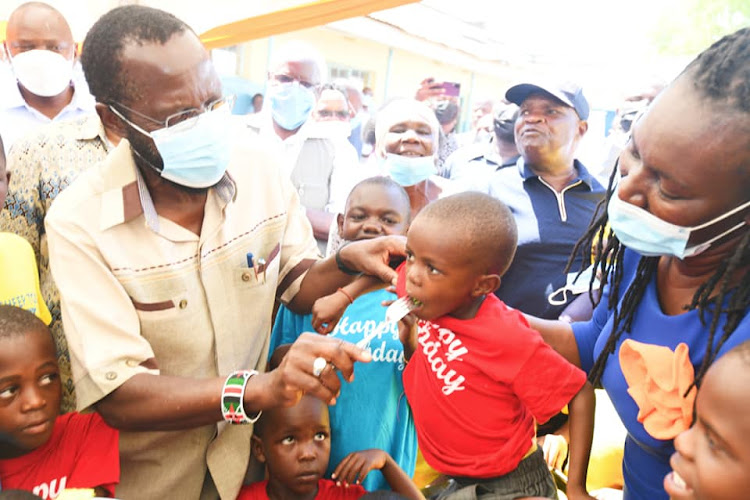 He said Raila is the right candidate to succeed President Uhuru Kenyatta and steer the country into the right direction on matters of governance.

Nyong’o, who has been rallying support for Raila, said the ODM boss is the most experienced leader capable of solving the problems bedevilling Kenyans.

Raila, he said, means well for the country based on his democratic, patriotic and unity kind of politics.

“As we celebrate Raila’s birthday, the best gift is to vote for him as the fifth president. He knows what we (Kenyans) need for our betterment,” Nyong'o said on Friday during Raila's 77th birthday.

He termed the countrywide birthday celebrations as the liberation to usher in a new style of leadership that Kenyans have yearned for decades.

He said Raila and Uhuru are committed to unite Kenyans and improve livelihoods irrespective of tribe.

Nyong’o challenged youths to arm themselves with voter's cards and ensure they vote for Raila to clinch the presidency.

He said the youths will play a critical role in forming the next government hence must make a wise decision when voting in the forthcoming polls.

“He is the most qualified and right person to continue with the legacy of Uhuru,” Nyong’o said.

The county boss urged residents to turn out in large numbers and register as voters in the second voter registration drive slated to start on January 17.

In his administration, he said his regime vouches for private-public partnerships in order to spur growth.

He said Kisumu is strategically positioned to market itself within the East African Community.

“Those who have eyes can see and those with ears can hear. We have achieved most of what we promised our people in terms of project implementation,” he said.

Advocate Makau also expressed confidence that Raila will win the presidency in the August 9 General Election.

He said history will be made after the election of Raila whom he described as the best bet Kenyans have for president.

“Raila is vibrant and the right person to head the country,” Makau said.

Raila, he said, has spent most of his life fighting for the liberation of Kenyans, which will soon pay.

“He is the only person who is experienced and can be entrusted with the leadership of the country.

“The country needs someone with the zeal to fight graft and Raila has exhibited that. I urge fellow Kenyans to vote him to the last man,” Makau said.

He also urged Kisumu residents to ensure that Nyong’o is re-elected saying he has helped transform the city.

“I have traveled across the globe and I can tell what a great city looks like, Kisumu is exactly one,” Makau said.

The scholar said the governor should be allowed to complete projects which he initiated.

He added that Kenyans want leadership which can create an enabling environment for investments.

“We will tell supermarkets and other outlets not to allow people who do not have the two vital documents” he said.

Market/Milimani MCA Seth Ochieng alias Adui said that they will rally behind Nyong’o and ensure he is re-elected.

He said Nyong’o has initiated various development projects aimed at bettering the lives of county residents.

Ochieng rallied other MCAs to mobilise members of the public to acquire voter cards in the second voter registration drive on January 17 ahead of the general elections.

If not for Raila, I wouldn't be Nairobi Governor - Kananu

Says peace, stability being witnessed in Nairobi is because of Raila's support.
News
2 weeks ago
by MAURICE ALAL Correspondent, Nyanza Region
Nyanza
10 January 2022 - 22:00