• The elders will also consider education level, general conduct and past development record.

•The elders said they want the exercise to be completed early enough before political parties engage in primaries. 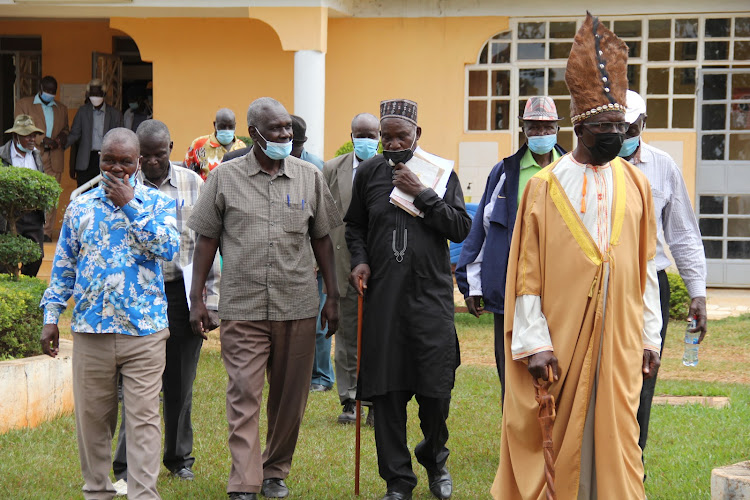 Luo council of elders from Kabondo Kasipul led by chairman Apolo Bwana during a meeting at Diakonia in Kojwach on January 7, 2022.
Image: ROBERT OMOLLO

Some members of the Luo Council of Elders in Kabondo Kasipul have begun vetting aspirants for various seats in the constituency.

They will then present the preferred leaders to the voters.

The elders will also conduct civic education to enlighten them on how to spot corrupt, cruel, and incompetent leaders.

The more than 60 council members are undertaking the exercise after being trained by Uraia Trust organization on election and good governance.

Speaking on Friday during their meeting at Diakonia in Kojwach, the elders —Apolo Bwana (chairman), Vincent Obura (secretary) and Phoebe Owili (treasurer) — said they will begin the exercise in Kabondo East and Kojwach wards.

The vetted leaders will be presented to residents who are expected to make their choices from among them during the August 9 election.

“We’ll expose the character traits of aspirants. They grew in our midst and we understand them. Residents will make a choice out of the knowledge they have over the politicians,” Bwana said.

The elders said they want the exercise to be completed early enough before political parties engage in primaries.

Bwana urged political parties to work with them so only people with integrity are given tickets for election.

“Let the exercise not be misconstrued as endorsements. The exercise is purely meant for helping residents make the right decision,” he added.

Obura said they will use the exercise in fostering peace before, during and after the general election.

No council member will be allowed to go against the agreement.

“Necessary action will be taken against any member, including expulsion, on people who breach the agreement,” Obura said.

Elders urged their colleagues in Suba North, Rangwe, Ndhiwa, Karachuonyo, Suba South, Kasipul and Homa Bay Town contituencies to do the same for the sake of unity and a peaceful election.

“The organisation will facilitate the elders where necessary in order to have the right leadership,” Ojijo said.

Kwenyi said the national government will support what is meant for bringing peace and integration.

“Let people not go for money during election but morality,” Kwenyi said.