He said the vast lake lying idle is unexploited, noting that they can revive Fish Processing factories that were shut many years ago over issues that can be resolved.

•Kisumu governor Anyang Nyong’o said residents from the 14 member counties should invest more in farming for the sustainability of the flight cargo of fresh produce.

•Nyong’o said farmers need to venture into value addition and fish processing to tap into existing markets locally and internationally. 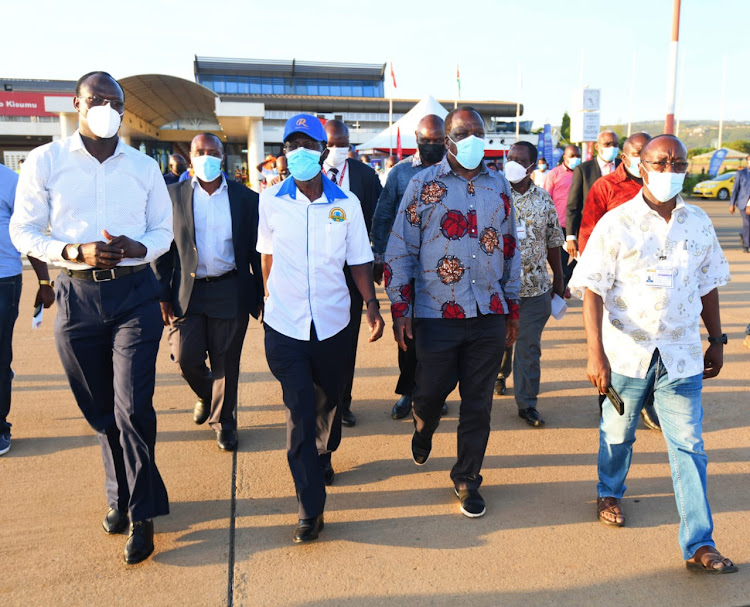 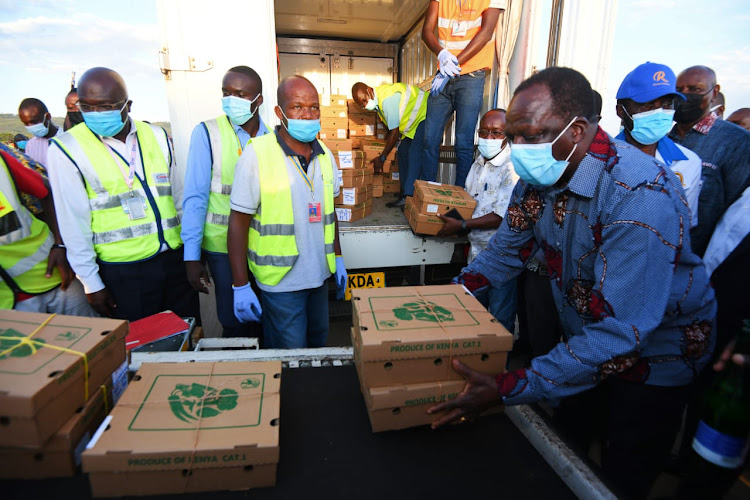 Residents from the Lake Region Economic Bloc (LREB) have been urged to embark on serious fresh produce farming for export through Kisumu International Airport.

Kisumu governor Anyang Nyong’o said residents from the 14 member counties should invest more in farming for the sustainability of the fresh produce market.

Nyong’o, who spoke during the launch of cargo division at the airport on Saturday, said the region is destined for a boom in business.

He said farmers and fishermen in Kisumu and the lake region were set to benefit immensely through the new development.

Nyong’o said farmers need to venture into value addition and fish processing to tap into existing markets locally and internationally.

Nyong'o noted that the launch of the cargo division at the airport has opened various opportunities and put the bloc on the international trade map.

He said the vast lake lying idle is unexploited, noting that they can revive fish processing factories that were shut many years ago over issues that can be resolved.

Nyong’o said there are vast land for the production of a variety of horticultural crops in the LREB catchment- from Busia through Kakamega to Bungoma to Nyamira and Migori.

“We have goodwill from our partners.  Let us get down to work. We are already seeing it in action,” he said.

Nyong’o said they are still committed to leveraging the economies of scale for better livelihoods of the approximately 14 million residents of the bloc's 14 counties.

“We are gathered here at the shores of Africa’s biggest freshwater lake to write an important chapter in the history of this country. We are here to celebrate the realisation of a dream,” Nyong’o said.

The governor said the airport, though built to international standards, has never handled cargo and lauded the Kenya Airports Authority and Kenya Airways for the achievement made so far.

Nyong’o said the KQ plane which carried the first export cargo from Kisumu will change the course of the economic history of the region.

“What we are witnessing is a major economic boon for this region.  It is a major statement that we have been sitting on a massive economic potential. I am sure this Airport will never be the same again after this first export,” he said.

He lauded Kisumu lake Front development Corporation Edward Ouko and his team for working tirelessly with all stakeholders to ensure the first export of fresh produce from the region was realised.

Nyong’o said his government formed the Corporation as a special purpose vehicle to promote investment, trade, and tourism.

He also commended Fresh produce exporters Association and the Flower Council, the Kenya Airports Authority, and Kenya Airways for their cooperation.

“We are also very grateful to our farmers and exports who made this a reality,” he added.

Noting that toughest job has just begun, the county boss said the biggest challenge now is the sustainability of these cargo exports.

“Where is the next cargo coming from?  Shall we sustain the demand? The answer is yes, we can.  We have the agricultural potential to produce various fresh produce,” Nyong’o said.

Nyong’o noted that the expansion of the airport is an essential element for the development of Kisumu and the region.

He stated that the establishment of a cargo village at the airport will create employment opportunities for cargo airlines, freight forwarders, farmers, and fish traders.

“As a county government, we shall ensure we put in place policies that promote fish production and development of horticulture for the export market,” he said.

A  cold storage facility owned by Mayfair Holdings will go a long way in enabling the airport to establish a full-fledged Cargo Division and Cold Chain Logistics.

He said his administration is keen to pursue balanced and accelerated investment in the county and new investment partnerships with both local and international investors.

“This summit was an eye-opener and the many deals and commitments made will in the next few months boost the county’s investment portfolio,” he said.

Nyong’o revealed that they sealed important deals in the Pharmaceutical Industry, hospitality, tourism, water and sanitation, and real estate.

He said the 9th Africities Summit to be held in Kisumu from May 17-21 will be a major boost to the cargo flight and urged residents to be ambassadors and prepare to participate in the grand Pan African event.

On his part, Oparanya urged counties within the lake region to allocate more funds for agricultural activities to support farmers in producing goods for export.

The counties, he said, should also employ more extension officers for expert advice to farmers. Oparanya further called on farmers to diversify from cane farming to horticultural crops for export.

“We are urging our people to stop over dependence on sugarcane farming. They should also focus on other crops for export for income generation,” he said.

Kisumu event to woo investors ahead of Africities Summit

More than 3,000 investors are expected to attend the forum
Counties
1 month ago

The graduants will be public educators on the safe and responsible use of pesticides
Counties
2 months ago
by MAURICE ALAL Correspondent, Nyanza Region
Nyanza
09 January 2022 - 23:00