• His key allies and officials in his government have joined different parties.

• Political observers say the move by Wangamati's key officials and allies to different parties is a bad sign for his re-election bid. 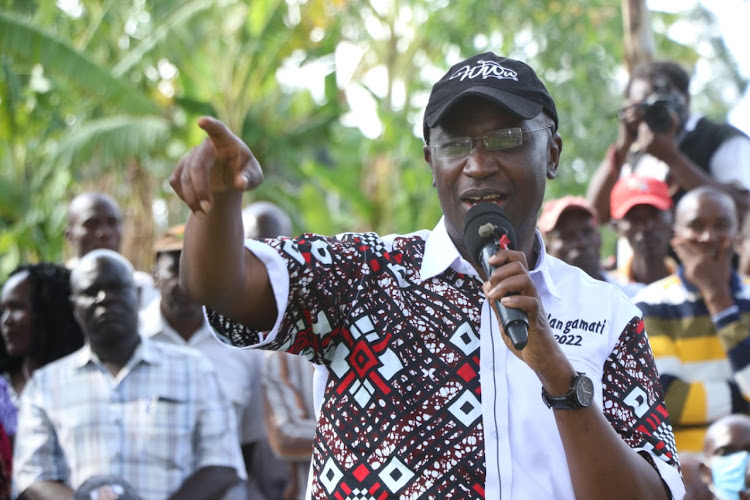 Bungoma Governor Wycliffe Wangamati is facing a headache over which  party he will use to defend his seat next year.

Wangamati, who won his seat on Ford Kenya ticket, has since fallen out with party leader Moses Wetang'ula. He has hinted at plans to defect, although he has not declared which party he will join.

His key allies and officials in his government have joined different parties.

Ngome and Mukhongo were the first to defect and join UDA party.

Speaking after their defection, they said they had undertaken a scientific research which showed a majority of Bungoma residents support UDA.

"We have done research which the governor is aware of and found that seven out of 10 people in Bungoma support Ruto and UDA. That's why we made this decision," Ngome said.

Ngome has declared interest in the Bungoma senator's seat, while Mukhongo is set to run for Kanduyi parliamentary seat.

Wandili, a close ally of Wangamati, is eyeing the Kimilili parliamentary seat. Last week he said he had joined DAP-K, which is associated with Defence CS Eugene Wamalwa.

"We want to associate with a local party that has a vision for our people. We can't stomach infighting witnessed in Ford Kenya," Wandili said.

Makheti has also joined DAP-K and plans to vie for Webuye West MP.

Kibaba, who is eyeing the Bungoma Woman Rep position, on Monday said she will be joining the ODM.

Buyela has said she will vie as an independent candidate.

MCAs, who are Wangamati's foot soldiers, have also moved in different political directions.

Political observers say the move by Wangamati's key officials and allies to different parties is a bad sign for his re-election bid. They say the governor will have a hard time making a decision on which party to move to.

"This can be construed to mean even his foot soldiers are unsure of his re-election," Ndivisi MCA Martin Wanyonyi.

He said it will be very difficult for Wangamati to whip them to support him if they are in different parties because interests will have changed.

Youth leader Allan Wocha said by Wangamati allowing his allies to make their choices showed he is democratic.

"He is a person who believes in giving people their democratic space, which is good for a leader," he said.

Wocha said at the end of the day all those who were Wangamati's lieutenants will vote for him despite party affiliations.