•Kidero said it is wrong for politicians eyeing various elective posts in Homa Bay to capitalize on tainting the reputations of their opponents to seek votes.

•He argued that violent campaigns have no place in the 21st century. 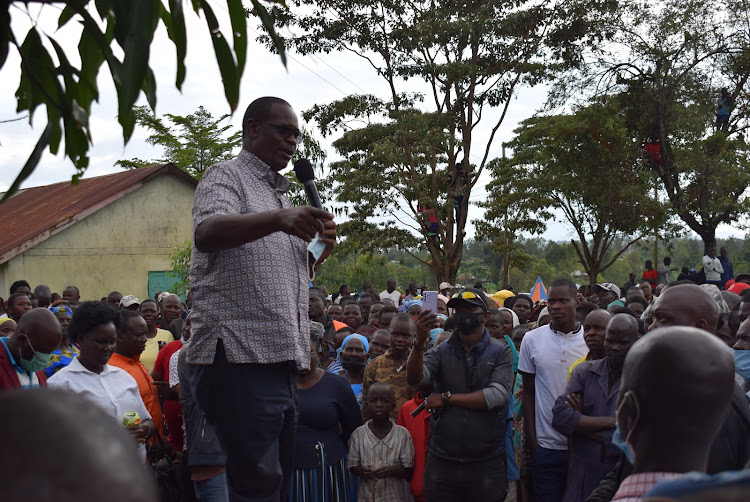 Kidero cautioned residents, saying such politicians cause violence as a way of realizing their political interests.

Political aspirants including those in Homa Bay are jostling for various elective posts.

Some are accused of focusing on personal interests without necessarily basing their campaigns agenda on what would improve the lives of the electorates.

Without mentioning names, Kidero said it is wrong for politicians eyeing various elective posts in Homa Bay to capitalize on tainting the reputations of their opponents to seek votes.

“Don’t fight your opponent. Vet all aspirants and vote in politicians with transformative agendas,” Kidero said.

“Politicians who taint the image of their opponents can’t develop the people and lack agenda.”

He spoke on Wednesday at Manyatta market in Rangwe constituency during the mobilisation of residents to enlist as voters.

Homa Bay has recorded a low number of people who have registered as voters since the exercise began early this month.

IEBC targets to register 177,000 new voters before the exercise ends.

Kidero argued that violent campaigns have no place in the 21st century.

He said issue-based politics can enable voters to evaluate candidates seeking support in the election.

Kidero who was accompanied by former Homa Bay Trade executive Carilus Ademba and governor aspirant Enosh Bolo pledged to implement development projects for the people should he get elected as governor.

“Homa Bay is endowed with resources which can improve the living standards of people if used well. We need a leader who can liaise with investors to establish industries here,” he said.

Ademba said Kidero is working with other ODM officials to mobilize residents to register as voters in large numbers.

He argued that voter registration is the only way through which residents can exercise their civic right of choosing good leaders.

“Being a voter will enable you to promote development by electing deserving candidates,” Ademba said.

They said registering a large number of voters will give Nyanza residents a say in the formation of the next government.

“We have our candidate Raila Odinga who is eyeing the presidency. Let us register in large numbers to increase his chances of acquiring the seat,” Kidero said.