• Odenyo said they will soon work with the recently unveiled UDA national officials from Nyanza to accelerate campaigns for Ruto in Nyanza. 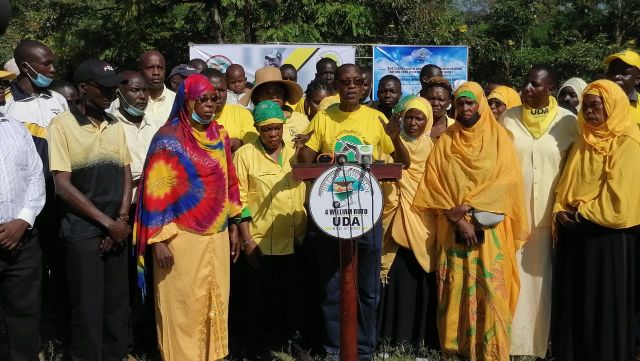 The team under the umbrella of Lakefront for Ruto said they will start active campaigns to popularise Ruto’s policies in the region.

“We are going to move around the wards and constituencies to entrenched the DP’s support at the grassroots,” Odenyo said.

He said they have rolled out an elaborate campaign strategy to endear themselves to the rural populace.

Odenyo claimed the people of Nyanza have for many years suffered economic marginalization and exclusion in the sharing of national cake because of stiff opposition politics.

He called upon residents to embrace political diversity and explore a new political path.

“Luo Nyanza requires a new political leadership that is on top of the game with eyes on the ball and that which blends with national values and aspirations,” Odenyo said.

Odenyo appealed to voters to go for leaders who will ensure the accountable exercise of power and authority taking into account that the people’s interests matter.

He addressed the press at Goan grounds in Kisumu city during the inaugural Ruto campaign drive in the region which is perceived as a strong opposition stronghold.

For years, the region has been dominated by singular political affiliation, the majority have been voting for and supporting ODM leader Raila Odinga without wavering.

However, Odenyo called for a fundamental shift from the traditional political pattern.

He urged the people of Nyanza to embrace political pluralism and stop hatching their “eggs in one basket”.

“In the fast-growing political dynamics in Kenya, the Luo community cannot afford to remain static in leadership if they are democratic,” he said.

The team defended the bottom-up economic model championed by Ruto saying it will transform the social-economic livelihoods of the poor.

Odenyo claimed the majority of the rural populace was still languishing in poverty due to domination of politics of power agenda as opposed to politics of economic agenda.

Ruto, he said, was keen to combine both political and economic agendas to transform the lives of Kenyans.

On voter registration, Otieno urged women to come out in large numbers to register as voters ahead of the next year’s general election.

Raila brings Eldoret to a standstill, pledges goodies for farmers

She noted that many eligible young people have not yet registered as voters which would make their political desire a mirage.

Odenyo said they will soon work with the recently unveiled UDA national officials from Nyanza to accelerate campaigns for Ruto in Nyanza.

In the officials line up, Eliud Owalo, Raila’s former strategic advisor was appointed as the deputy secretary-general for strategic partnership.

The two top UDA national officials from Nyanza are expected to drum up support for Ruto and break the decades-old dominance by the ODM party.