Akama says the university has no money to honour those agreements.

• For two months now, teaching at the university continues to be affected after lecturers went on strike. 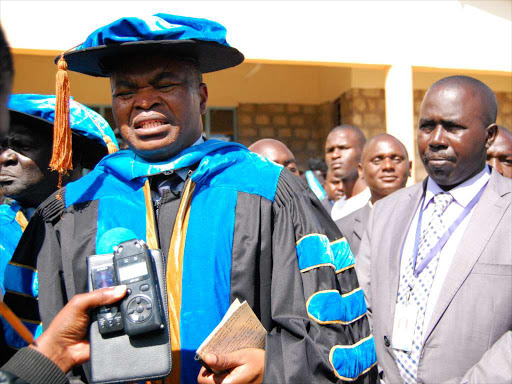 Universities and Academic Staff Union vice chairman Cyprian Ombati said it was unfair for the university administration to dilly-dally in honouring the agreements, some dating back to 2013.

“For the betterment of the welfare of the dons, we request that the administration gives them full support. As a union, we don’t want scenarios where everything has to end in the streets to be resolved,” Ombati said.

For two months now, teaching at the university continues to be affected after lecturers went on strike, citing failure by the institution's management to honour three collective bargaining agreements.

They urged the university to remit staff contributions to Saccos, banks, insurance and pensions.

“There is little communication from Akama showing any commitment to have the matter resolved. As a union, we are going to press until these issues are profitably concluded by his office,” Ombati said.

He spoke in Nyaribari Chache, Kisii.

Ombati said the university has the capacity to pay lecturers to enhance its image, already dented by its failure to remunerate the teaching staff.

“By this end of July, we will stand for nothing but the full implementation of the collective bargaining agreements which encompass full payment of their dues,” he said.

Akama has since said the university has no money to help it honour those agreements.