Kisii Tangatanga wing buoyed up by Nyachae and Magara support

Pledges to deliver victory for DP William Ruto in upcoming ward by-election and 2022.

• Nyachae and Magara said they will stand with Ruto to ensure he wins the presidency. 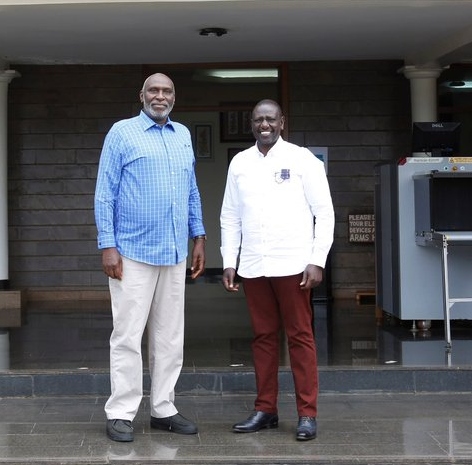 The Tangatanga brigade in Kisii says it is set to secure victory for Deputy President William Ruto come 2022.

On Sunday, the politicians said they have already set in motion a scheme  aimed at securing victory in the upcoming Kiamokama ward by-election in Masaba South.

The seat fell vacant following the death of Peter Mainya of ODM in November. He died of Covid-19.

About 10 candidates have since shown interest in the seat, which, according to the Tangatanga leaders, will be their first political acid test.

“We have left the station but the first acid test is to claim the Kiamokama ward seat at any cost,” Osoro told a meeting at Itibo Resort in Suneka.

Maangi said Uhuru should support his deputy and not one who never fought alongside him as they chased for the presidency.

Ruto was last in Kisii on September 10, with his plane touching down to a dawn of chaos between pro-ODM youth and pro-Tangatanga groups.

The formation has netted a few familiar faces, among them former Commission for Implementation of the Constitution chairman Charles Nyachae and People’s Democratic Party chairman Omingo Magara.

Nyachae described himself an ‘immigrant hustler’ joining forces from those in the dynasties but who have the common dream and aspiration of those ready to improve the livelihoods of the struggling class.

"Ruto, besides being a friend, is a man of courage and one who means well for this country. For me, I see these two qualities as sufficient proof of one that we as a community should galvanise our support for ,” he said.

Though there had been twists in the erstwhile camaraderie between President Uhuru Kenyatta and his deputy, the promise to support Ruto for presidency should had been the glue that bound the duo till 2022, Nyachae said.

"My thinking is that that promise he (Uhuru) made to support Ruto should stick. I was in there throughout the campaigns in 2017 and can stand here to boldly testify that this promise was made by him and it does stand.”

Nyachae said nothing, if any, will make him think otherwise. "If I do so, I will  share the guilt of those bent on breaking  promise."

The Sunday afternoon meeting was the first open political forum Nyachae was appearing in to openly endorse Ruto since he first surfaced at his Karen residence a month ago.

The meeting at Suneka was also attended by some MCAs from the the Kisii county assembly, which has been embroiled in infighting over push to oust speaker David Kombo.

The politicians opposed the Building Bridges Initiative, saying the obsession  to revise the Constitution every other few years by the country’s  political class was madness that should not go unchecked.

They said they stand in concert with Ruto, who has several times said there is no urgency and value in the country expending huge amounts of resources in a 'wasteful political exercise'.

"My personal position on the planned referendum of this document is that we are committing an illegality. The document has not been subjected to a public participation exercise," said Nyachae, a judge at the East African Court of Justice.

He spoke of missteps in the procedures by the proponents of the amendments.

"They are telling us that this BBI has been subjected to public participations, yet, in all practical purposes, there is nothing to that effect. How can we call it public participation, yet all that we are seeing are different versions of the document being unveiled?" Nyachae asked.

He said the Constitution is being mutilated on the altar of selfish ambitions and excesses by those the country has entrusted with leadership.

"I feel like shedding tears. This is not what we had envisaged when we dreamt of having a progressive country under a progressive constitution. We are witnessing political chaos being packaged as BBI. Even if I remain alone, I stand to denounce it," Nyachae said.

He said even with the clamour for additional constituencies by some Gusii leaders, the document amounts to nothing if it has failed the first public scrutiny test.

The former CIC chair said he may not announce any political ambition yet but will forge on with the singular  preoccupation to ensure Ruto wins the presidency.

Nyachae had vied for Kisii senator in the last election on the Jubilee ticket but lost it to Sam Ongeri of ODM.

“At my age, I am not at multitasking, all I would do, and I want my people to understand this, is to ensure Ruto is at the right place of history when Kenya goes to the polls in the coming two years,” he said.

Magara, also former South Mugirango MP, said his crystal ball has told him that being with Ruto would serve Kenyans better, and by the extension, the Gusii nation.

He described as chasing the wind his long support for ODM.

“I tender my apology, why? Because I shouldered a bull ,wrongly thinking it was a cow to milk for my people, years now I return home empty,” said Magara of his walk with ODM leader Raila Odinga.

He said the philosophy behind the BBI was misguided and wrongly premised.

"It is not in my DNA to support the rubbish. Unless we go for consensus as advocated by Ruto, we will put it where it belongs when it goes to the referendum,” Magara said.

Maangi also waded into the raging wars at the county assembly, saying the ward reps have a chance to pick a new speaker and those funding the skirmishes should be prosecuted.