• County Governor James Ongwae said the new station will be pumping one million cubic of water per day adding that construction works on site are due to start in October this year.

• Ongwae said the project grant was jointly negotiated by the ministry of Finance and his administration. 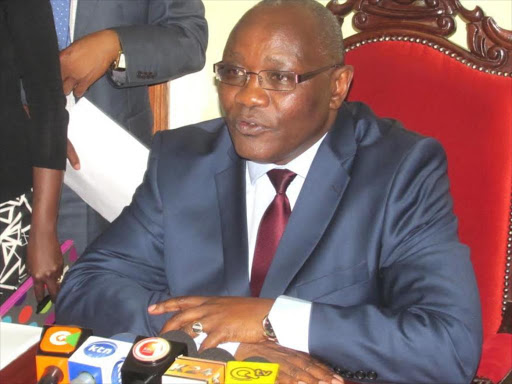 Thousands of Kisii residents are set to benefit from a multi-million water project to be funded by the Unicredit Bank of Austria.

The lender has already committed Sh800 million required to start off works at Mokubo area in Bomachoge Chache subcounty.

The water will benefit residents of neighbouring South Mugirango and Bobasi constituencies.

Governor James Ongwae said the new station will be pumping one million cubic metres of water per day. Construction works will start in October.

“I am happy to announce that the project has been approved. It covers a 40km radius from Mokubo area meaning that it will serve the entire Bomachoge Borabu, Ogembo and parts of Etago and Bobasi,” Ongwae said in his office on Wednesday.

he spoke when he received a delegation from the Austrian government. The team was led by Kimani Rebo. Ongwae said the project was jointly negotiated by the Ministry of Finance and the county government.

The project will cover water and sanitation with the installation of a water treatment facility.

There will also be kiosks to serve homesteads, schools, markets and public institutions in the neighborhood, Ongwae said.

“The project is a major boost to the county’s water projects, including boreholes," the governor said.

He asked residents to cooperate.

Ongwae said due diligence has been undertaken and that the contracting authority, the Lake Victoria South Water Works Development Agency was ready for the start of the project.

Rebo commended the county for initiating the project to boost water supply to rural folks.  Rebo, who represents the MUT Austria Company, said they were a renowned water firm and that they were willing to undertake more projects in Kisii.

'We thank Governor Ongwae for letting us have the first milestone from Austria that will have a lot of impact to the rural folk.

LVSWWDA's manager for asset development Paul Agwandasaid the agency will be offering the technical support to guide the implementation that will be done by the Kisii county government together with MUT.

“Water is a human right and we are here to fulfill this fundamental requirement of the Constitution. We are looking forward towards the commencement of the project,” Agwanda said.

Elsewhere, the government has begun drilling at least eight boreholes in Masaba South to address water shortage in the region.

"Already, three boreholes have been sunk in the last two months alone. The rest will be completed in the coming months," Machogu said.

The lawmaker said solar panels will be put up in each of the boreholes to pump water. The funding and construction of the wells will be done by the national government through then Lake Victoria Water Basin Services Board, Machogu said.