•  The government has already released Sh500 million for the facelift of the port with the remaining Sh2.5 billion expected to be pumped in soon.

• Workers at the port were given strict orders to ensure most of the work is completed before the launch next. 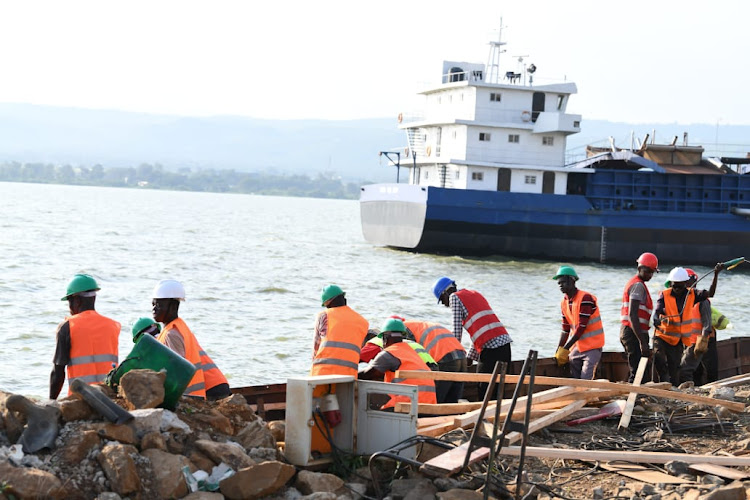 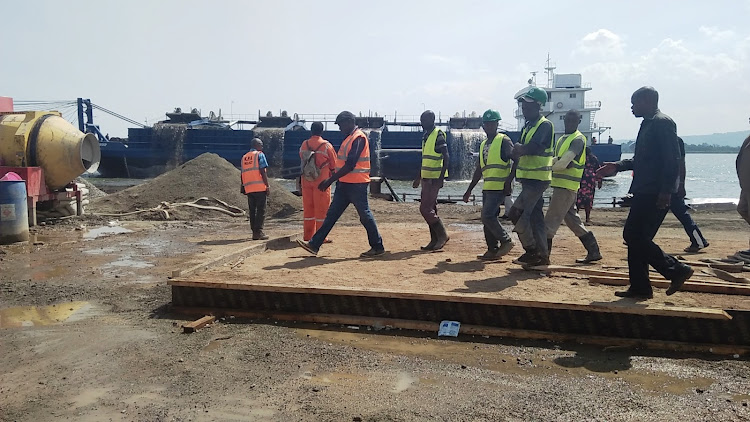 President Uhuru Kenyatta made an impromptu visit to Kisumu Port raising hopes of economic development and revival of vital projects.

Uhuru on Saturday inspected progress of the rehabilitation work being done at the Sh3 billion port after a two-day visit to Tanzanian President John Pombe Magufuli's home. The port is expected to be officially opened next month.

President Uhuru has become a regular visitor in Nyanza after the handshake with his once bitter rival Raila Odinga. On June 18, he attended the funeral of Kisumu Governor Anyang' Nyong'o 's mother alongside Raila.

"We hope that after the port is completed, there are plans to revive the sugar industry and Kisumu cotton mills," resident Mark Otieno said.

Another resident Miriam Mulinga said they are happy that the President can freely visit the city to inspect projects. He said it is time for Nyanza and the entire country grow because of peace.

The government has already released Sh500 million for the facelift of the port with the remaining Sh2.5 billion expected to be pumped in soon.

Uhuru's Saturday visit was private. Journalists were locked out of the tour. He was was accompanied by Kisumu Deputy Governor Mathews Owili, Cabinet secretaries James Macharia (Transport) and George Magoha (Education) among other government officials.

Workers at the port were given strict orders to ensure most of the work is completed before the launch.

The renovated port is expected to be officially commissioned by the President. Ugandan President Yoweri Museveni and the Democratic Republic of Congo's Presient Felix Tshisekedi are expected for the launch on August 15.

Uhuru also toured the Kenya Marine School and the dry dock where the giant MV Uhuru is docked. He held meetings with officials and was briefed on the project. He went to State House Kisumu and left later for the airport.

Sources say the President boarded the MV Uhuru cargo vessel and sailed in one of the repaired tugboats deep into the lake.

Two weeks ago, sources say President Uhuru ordered the repair of the 1,000-tonne and 91-meter-long cargo ship. And it was  all joy for engineers and officials at the port as the MV Uhuru engine was switched on and it roared on for hours.

The Lake Victoria cargo ferry had been grounded for years. Kisumu residents are optimistic that once it starts operations, more job will be created.

On Thursday morning, Raila toured the port to check the ongoing work. He then went to Kicomi and held a private meeting with officials. He was accompanied by top security officers from the county, officials from Kenya Railways and Kenya Ports Authority.

President Uhuru and Raila committed to ensure the port regained its lost glory. A spot check by the Star showed workers from the National Youth Service and prisons clearing bushes around the port.

Sources told the Star the Kenya Coast guards have taken charge of security at the port ahead of the launch. Officers manning the gates have been given strict orders not to allow anybody to take photos or videos within the port.

The renovation of the port is meant to allow bigger vessels to dock in Kisumu to enhance trade with neighbouring countries.

Interior CS Fred Matiang'i toured the facility two weeks ago and said it will create more employment and business opportunities. He is expected to make another  tour in the company of Transport CS James Macharia anytime next week.

“The President has ordered that everything be in place. We are working wth different authorities like Kenya Railways, Kenya Ports Authority, National Youth Service and Kenya Navy among others to clean up this place. It will be revamped and people will get employed,” Matiang'i said.

On June 14,  Uhuru and Raila visited the port to check progress of construction works. The two leaders were also at the port in January.

“We were here with the President and Raila Odinga who told us that this place was vibrant in the early years but neglect led to its poor state today. The ongoing construction will restore its glory,” Matiang'i said.