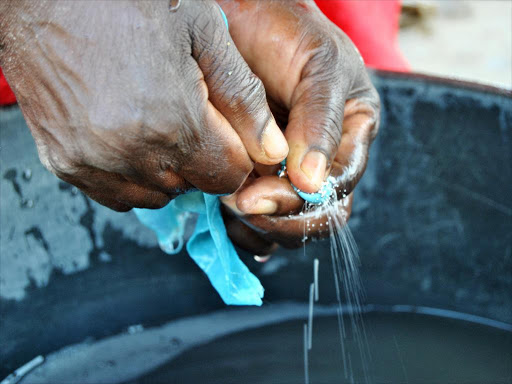 The Migori gold rush has taken a toxic toll on miners’ and residents’ health.

It has led to brain damage and cancer, as well as death and injuries.

The largely unregulated mines have provided livelihoods for about a century since Europeans found the first deposits. They have now turned into deathtraps.

In the 1920s, European missionaries set up camp in Macalder, Nyatike. This marked the beginning of exploration. The areas became a beehive of activity. Ever since, there has been a real buzz about gold as miners seek to hit a pot of gold.

However, in the midst of all this are bigger concerns, which they largely ignore.

Walls cave in and kill, children drop out of school in search of fortunes, some people suffer brain damage and get cancer from the hazardous mercury used to purify gold. Others die from poisonous gas inhaled when pumping out water whenever it rains.

County children’s officer John Odinya yesterday said about 8,000 children work in the mines, with 300 dropping out of school annually. “It’s unfortunate,” he said. They work long hours but, despite all the sufferings, get minimal returns — a poisoned chalice.

In Kehancha, Kuria West, residents joined the gold rush less than five years ago. They have nothing to smile about. The region is now plagued by landgrabbing and many buildings have cracked walls because of undergound tunnels.Tunnels are dug in empty parcels. Even public land such as Kehancha Stadium has been targeted.

“We urge the government to give us this stadium land for mining. It’s riddled with tunnels that can lead to collapse,” miner Pius Mwita said.

Kehancha Mixed Secondary principal Daniel Mirumbe said they are facing a disaster. Classrooms could soon crumble. Their borehole’s low water level is due to mining. They have about 600 students.

“Many tunnels dug underground by the gold miners may sink our structures any time,” Mirumbe said.

Research published in the Journal of Geochemical Exploration in 2014 by local and international scientists concluded that levels of toxic metals in soil and water from the region were higher than those recommended by the WHO and FAO.

“Mining and other human activities in the Migori gold belt have led to the release of toxic levels of cadmium, lead and mercury, which may lead to serious environmental health consequences in humans,” it states.

Another study in Migori found that during peak mining periods, mostly when there is little rain, more than 20,000 new miners migrate to the belt. The high population worsens the situation. But old habits die hard. The miners aren’t willing to adopt new measures to save their lives.

In March last year, Swedish firm World Gold Link Company introduced gold extracting machines that do not use dangerous mercury. They have been ignored.

On January 20, Basil Ochieng was pulled out alive after being buried for 24 hours after the walls of a 100-foot pit collapsed in Rongo mines. Two days earlier, a man died from carbon monoxide poisoning as they pumped water out of Bukira mines. His two colleagues escaped.

On January 15, the High Court ordered a Chinese miner stop operations in Macalder following a petition by Nyatike MP Tom Odege. Residents complained the firm was destroying the environment.