We are struggling due to unpaid royalties— musicians

Ask state to help them reap from their work, say they are unable to fend for themselves despite their songs being played 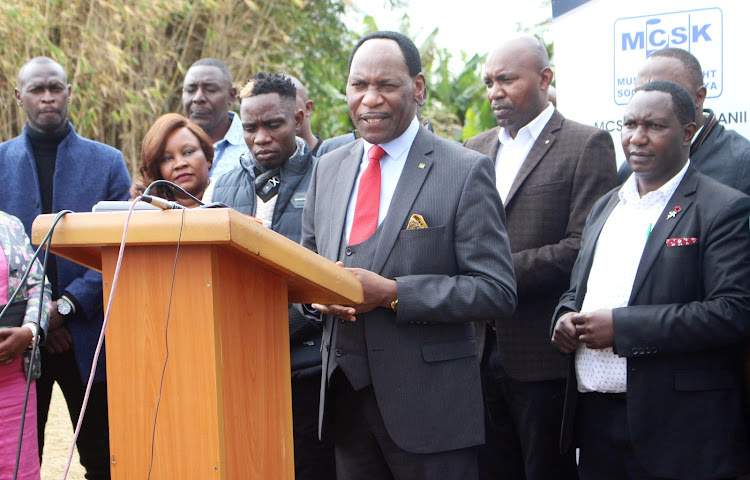 Musicians have urged the government to help them collect royalties from consumers of their art across the country.

They narrated the deplorable state in which some were living in blaming their plight on unpaid royalties alongside neglect of the music industry by relevant authorities.

Some said despite being in the industry for over 40 years, they had nothing to show as achievement for their work even though their songs were being consumed by lots of people in the country.

“Musicians’ suffering must come to an end. It’s wrong for musicians to struggle with life to a point that they can’t afford paying their house rents, pay school fees for their children, and afford basic needs. Majority live in deplorable state, it’s a shame,” Pastor Mary Wambui said.

The musicians addressed the press during the Music Copyright Society of Kenya’s 31st Annual General Meeting at a Machakos hotel on Tuesday.

“We are supporting the government because we have lived bottom – up lives for a long time. We plead with President William Ruto’s administration to uplift us. Some of us are unable to pay rent while their music is played everywhere,” Wambui said.

Nancy Torome said she started singing in 90’s but the industry had never been fair to them.

“Our government should consider musicians. As a gospel artiste, I pray that God opens ways in the industry so that we have a stable foundation,” Torome said.

MCSK national chairman Lazarus Muli said the society had been in existence for 40 years.

Muli likened MCSK members to Israelites who suffered many years before God answered their prayers.

He said their current predicament was heightened by the fact that MCSK licence was at some point revoked for 2 – 3 years over leadership wrangles.

“There is no corruption in the society. For the last 2 – 3 years our license was revoked and other parties issued.”

Muli said MCSK had been unstable due to accrued debts and hard stance on the members by KRA.

He assured members that since they had laid down workable structures to help in debts collection, they would receive good amount of money as their royalties distributions on December 15, 2022.

Muli said the government should consider them for the proposed hustlers’ fund since musicians were hustlers.

MCSK CEO Dr Ezekiel Mutua said the society was founded in 1983 stating that members will be celebrating its 40 years existence in 2023.

Mutua said the society was getting back to life stronger, better, vibrant and serving members more effectively and efficiently.

“We are grateful having this AGM at a time when we just had new government in office. It sets the tone on how we are going to operate in the next five or 10 years in line with the new government’s philosophy,” Mutua said.

He said the society shouldn’t be underrated since it has 15,000 members.

“This is an industry that is represented everywhere. The suffering of musicians is because of piracy, lack of proper policies that recognises music as a career,” Mutua said.

He urged consumers of pirated musical works to pay for them through licenses.

“The matatu industry can’t operate without music, they play music day and night. We are asking them to obtain licenses going forward,” he said.

He said PSVs owe musicians lots of money since they hadn’t paid since 2019.

Mutua said there was no money to distribute to musicians in form of royalties since there were no collections.

“People aren’t paying, the media industry owes us over Sh300 million. The collection of royalties is a critical component of distribution, you can’t distribute what you haven’t collected,” Mutua said.

He asked for re-enforcement from the National Police Service to help them collect the debts.

“When we call on police for re-enforcement, it’s in the constitution. We can’t collect on our own. The only reason we can be organised and operate as a civilised society, collect money from the users of copyrighted musical works is to have re -enforcement,” Mutua said.

“It can’t be business as usual. If you are using music belonging to our members, pay for the copyright. Obtain a license from MSCK, ensure you use that music in a legal way,” he said.

Bien said he should start by firing MCSK boss Ezekiel Mutua
Sasa
2 months ago
Post a comment
WATCH: The latest videos from the Star
by GEORGE OWITI
North Eastern
16 November 2022 - 22:00
Read The E-Paper