Why hunger crisis in Northern Kenya threatens a generation

Children are getting married off, others dropping out of school to look after cattle or take care of their younger siblings 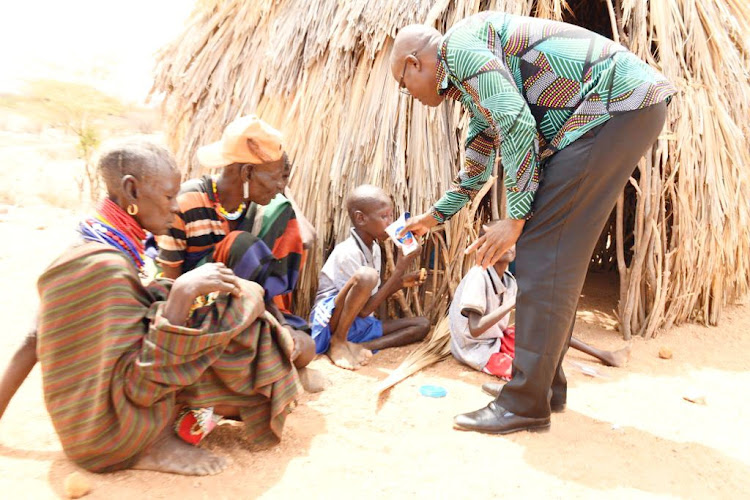 The unforgivingly drought ravaging parts of Northern Kenya is threatening a generation in that part of the country.

Children are getting married off, others dropping out of school to look after cattle or take care of  their younger siblings as parents go out in search of food, water and pasture.

10-year-old Grade 4 pupil HL did not report to school for third term. Being a first born in a family of seven children, he has been forced to be the caregiver of his siblings as his parents focus on putting food on the table and ensure their cattle don’t die.

His father has been away from home for weeks, hunting for pasture and water to sustain them in the face of the biting drought and famine.

His Badanrero village which is 100km from the border town of Moyale near Ethiopia, has been badly ravaged.

Besides taking care of his siblings, sometimes he accompanies his father in the water and pasture hunting missions, sometimes walking 40 kilometres.

The tale is almost eerily similar for Boru Dabui, a 23-year-old mother of five who lost her last born child to starvation.

The young mother has to forgo meals just so her little ones can eat,  the poverty and difficulties making her life meaningless. “it is a harsh life,” she says.

According to Red Cross, an estimated 3.1 million people in ASAL areas of the country have become severely food insecure following three consecutive poor rainy seasons that have hampered crop production.

It said some 500,000 people need immediate assistance to remain alive.

The Kenyan government has been leading efforts to mobilise help for people and livestock as well as wild animals in the face of the crisis, with President William Ruto describing the drought as unprecedented in 40 years.

Gachagua had said the state had put some Sh4.9 billion in mitigation and that the government has raised the needed Sh2 billion a week to feed the hungry and save lives.

Besides the government interventions, international aid world has swung into action.

The drought is the worst in the region for 40 years and in the last 10 years.

SOS children Village last week launched an international appeal to raise    €10.3 million to help families in four countries of horn of Africa, including Kenya in the face of the drought and famine.

Kenya will get some of this cash sent directly to the vulnerable families to put food on the table to ensure the children remain cared for in the family set up.

It said it has secured a half of the target, some €5,080,683, to help with the emergency response to support children in the most vulnerable of situations.

“So far, we have managed to secure €5,080,683, which is 50 per cent of the planned budget from private and institutional donors. There is plan to scale up the programmes with extra support from the global community which must recognise the severity of this crisis and prioritise actions that save lives, reduce human suffering and maintain the dignity of unaccompanied and separated children,” the lobby said in a brief to the Star.

The lobby’s global CEO Ingrid Johansen told the press that though no efforts are spared so far in helping the affected, no special focus has been given to children who bear the brunt of the drought.

“Most children are dropping out of school to help parents look for food and livestock. Some are getting married off while others are becoming vulnerable to joining criminal and violent networks such as terror cells in exposed frontiers,” Johansen said.

“Some other children are being left without proper familial care. That is why we must mobilise all efforts within our reach to target the children and help them within the context of their families,” the CEO added.

She said coupled with inflation, life has become hellish for the children in the affected areas.

The lobby says by its estimation, some 19 million people facing acute famine and in need of urgent help.

“It is deeply concerning to hear reports of children being abandoned by parents as they search for food. The children losing parental care is exposing them to trafficking among other ills mentioned. We are working to keep families together by giving them all help we can afford, including psychosocial support,” Johansen added.

SOS village operates by sheltering vulnerable children without parents, having them live in family-like set up. It has five facilities across the country, with each facility having some 15 to 15 villages where the children live and are supported.

Its facilities are in Nairobi, Mombasa, Eldoret, Meru and in Kisumu.

It currently has close to 2000 children under its care nationally.

Approximately 4.3 million Kenyans are affected by the drought.
News
4 weeks ago

Hunger pushing learners out of schools as drought persists

Concern as more than 200 Juja pupils drop out of school due to hunger
Counties
3 weeks ago
Post a comment
WATCH: The latest videos from the Star
by GORDON OSEN News Journalist
North Eastern
14 November 2022 - 22:00
Read The E-Paper