•  The chairman said their main aim was to realise a mean of at least 255 and more than 50 per cent in the two subjects. 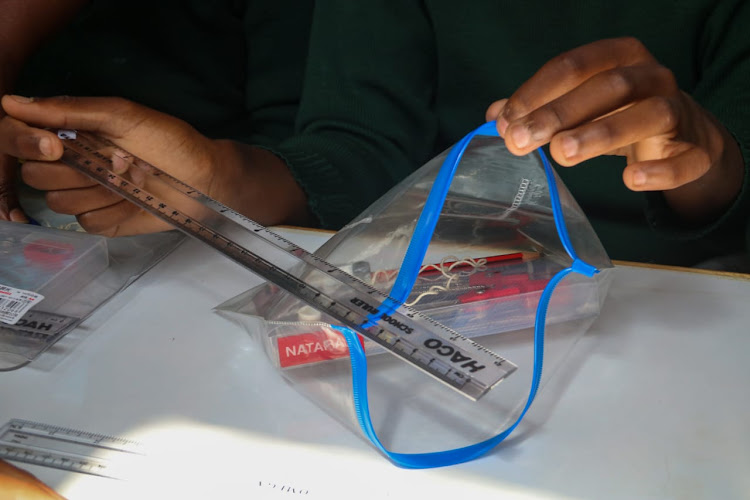 CURBING CHEATING: A Class 8 pupil showcases the materials she will use when sitting for her KCPE at Westlands Primary on Friday, March 4.
Image: WILFRED NYANGARESI

The teachers under the umbrella of the Kenya Primary Schools Heads Association held workshops in Igembe, Tigania, and Imenti bringing together teachers in charge of the two subjects for capacity building.

Kepsha Meru chairman Bernard Kiraguh said the workshops were informed by the poor performance in the two subjects, which pulled down the county’s mean score.

He spoke during a workshop in Kaaga Girls Secondary School.

“The two subjects pulled us down to a mean score of less than 250. That's why we are trying to find ways in which we can improve them and maintain good performance in the other subjects,” he said.

The chairman said their main aim was to realise a mean of at least 255 and more than 50 per cent in the two subjects.

The workshops also brought together sponsors from the private sector including Targeter Publishers, Equity Bank, Solution and Trans-nation Sacco.

The stakeholders vowed to support the cause for better performance in this year’s examination.

Targeter CEO Peter Kiarie said the company, which mainly publishes learning materials will deploy its experts in the two subjects to mentor the teachers on ways of improving performance.

The company also rewarded the best-performing schools in the county and also motivated the poorest by issuing them with free learning materials.

“We have made a resolution to support each other in every way possible, to realise better grades in the future,” Kiarie said.

Her sentiments were echoed by her counterpart from the Trans-nation Sacco Betty Kairuthi who said they are also exploring ways of motivating teachers and learners to improve the county's performance.

Mang’u students dominate, take first and second positions to once again emerge as the best boys' school
Counties
3 weeks ago

From August,15 to August 30, the portal will open for school choice.
News
2 weeks ago

Slum school pushes learners to fly with the best