Over 100,000 inmates targeted for first Covid jab this week

The department has covered 70 per cent of prisons countrywide 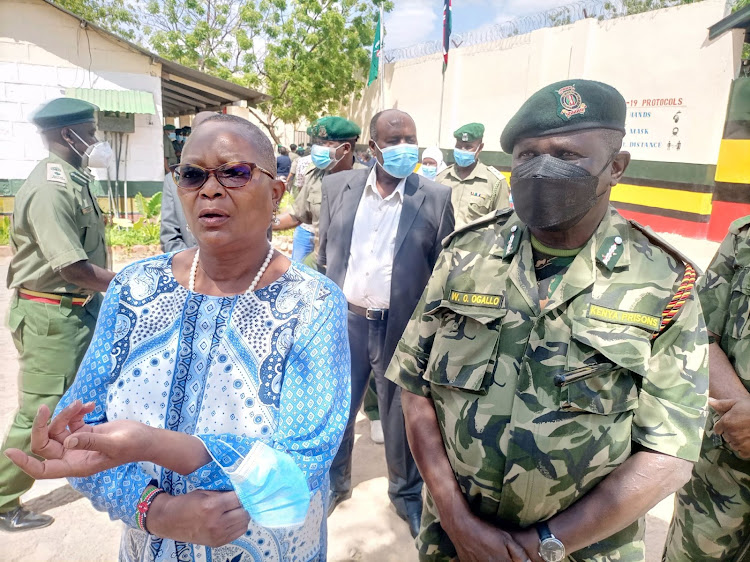 The prisons department targets to vaccinate 100,000 inmates, staff and their families.

Guchu spoke during a tour of the Garissa prison on Tuesday. She was accompanied by other top prison officials among them the prison’s commissioner Wycliffe Ogola.

“We want 100 per cent vaccination among our inmates, staff and family members so that we can be able to open up the prisons. We don’t intend to have Covid in the prisons when we open up for visitation,” Guchu said.

She said the ministry will continue monitoring the programme to address any challenges as the exercise progresses.

On vaccine hesitancy among staff, Guchu said they are trying to establish why there was some reluctance, an issue she said going forward will be addressed.

At the Garissa medium prison, 93 per cent of inmates have already been vaccinated while 60 per cent of the staff have taken the jab.

“We want to make sure that we bridge the 30 per cent gap by Friday. We have cooperation from the Ministry of Health who are giving us their health officers so that we can be able to meet the target,” Guchu said.

She said the inmate vaccination programme started two weeks ago noting that they will be at 100 per cent by January as they start the second dose.

“It is good to note that the Ministry of Health is the one supplying us with the vaccine as well as helping with sensitisation. We must work closely if the exercise is to succeed,” she added.

So far, over 3.66 million doses have been administered. However, just about two per cent of the country's 48 million people are fully vaccinated.

The government targets to inoculate at least 10 million people by December.